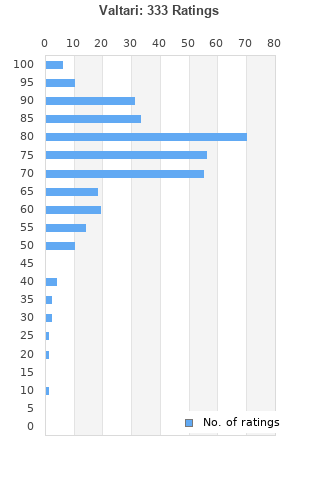 Valtari is ranked 6th best out of 19 albums by Sigur Rós on BestEverAlbums.com.

The best album by Sigur Rós is Ágætis Byrjun which is ranked number 64 in the list of all-time albums with a total rank score of 22,621. 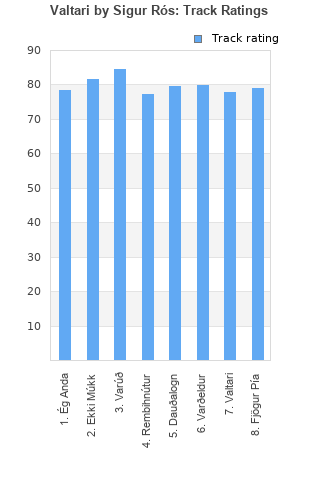 Rating metrics: Outliers can be removed when calculating a mean average to dampen the effects of ratings outside the normal distribution. This figure is provided as the trimmed mean. A high standard deviation can be legitimate, but can sometimes indicate 'gaming' is occurring. Consider a simplified example* of an item receiving ratings of 100, 50, & 0. The mean average rating would be 50. However, ratings of 55, 50 & 45 could also result in the same average. The second average might be more trusted because there is more consensus around a particular rating (a lower deviation).
(*In practice, some albums can have several thousand ratings)
This album is rated in the top 19% of all albums on BestEverAlbums.com. This album has a Bayesian average rating of 74.8/100, a mean average of 74.0/100, and a trimmed mean (excluding outliers) of 74.8/100. The standard deviation for this album is 13.4.

Was a little to slow for me the first time I gave it a listen but as I've gotten older I've found myself coming back again and again. Definitely more ambient and less rock but still a beautiful album none the less.

Visiting your grandparents house; you sit around the fireplace and you look back at your most precious childhood memories through the vintage photo album.

so good except for Rembihnútur. i love the ambience, the choral vocals, and the strings. it's beautiful

The songs are lush and dense, and, though they do often feature vocals, the lyrics are unintelligible. They may be in Icelandic or they may be in Hopelandic, which is basically pretty sounding gibberish (but honestly just sounds like more Icelandic to me). Like every one before it, is pretty and best enjoyed through headphones.

Fjögur Píanó is one of the best Sigur Ros tracks, and maybe my favorite music video ever.

For me, this is a fantastic album. Maybe not as great as (), but I loved it since the first listening.

Over a year later, and after numerous listens in various situations, this is truly one of the greatest ambient albums. Quiet melancholic beauty.