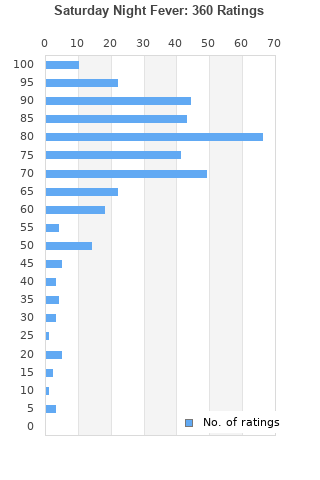 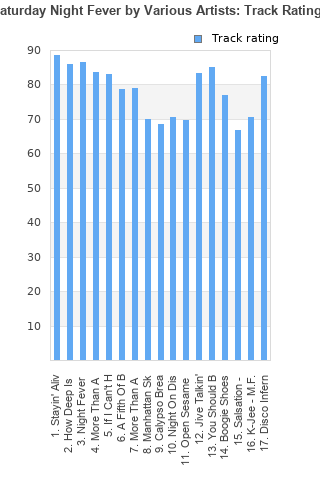 Outliers can be removed when calculating a mean average to dampen the effects of ratings outside the normal distribution. This figure is provided as the trimmed mean. A high standard deviation can be legitimate, but can sometimes indicate 'gaming' is occurring. Consider a simplified example* of an item receiving ratings of 100, 50, & 0. The mean average rating would be 50. However, ratings of 55, 50 & 45 could also result in the same average. The second average might be more trusted because there is more consensus around a particular rating (a lower deviation).
(*In practice, some albums can have several thousand ratings)
This album is rated in the top 13% of albums on BestEverAlbums.com. This album has a mean average rating of 74.0/100. The trimmed mean (excluding outliers) is 75.4/100. The standard deviation for this album is 17.5.

For a soundtrack album, has some excellent disco songs. No wonder this was one of the biggest albums ever in the late-70s - so many danceable pop/disco songs.

Knock it but lets face it: this is the best disco has to offer and it's roughly funk w/ synths instead of bass. Some filler in the 2nd half keeps me from defending it more, but there's some cool stuff on here even if the movie was pretty silly overall.

Very good soundtrack to a great film. The Bee gees songs are the best. The rest is fine too. Burn, baby, burn!

The only disco album worth putting on anyone's top 100 list. Outside of this album the genre is pretty weak.

Outstanding album and a wonderful tribute to the disco era. Music that still sounds great today.

Never seen the movies, but the music included here is good.

Actually a very hit and miss soundtrack, but the hits (namely the Bee Gees tracks and a few others like Yvonne Elliman and KC And The Sunshine Band) make this a pure classic of the disco age.

You know, I've probably heard Stayin Alive a thousand times in my life but the funny thing about that song is that it actually rocks. Jive Talkin, You Should Be Dancing, Night Fever... there was a reason this was so huge: because it really was quite good.

Your feedback for Saturday Night Fever