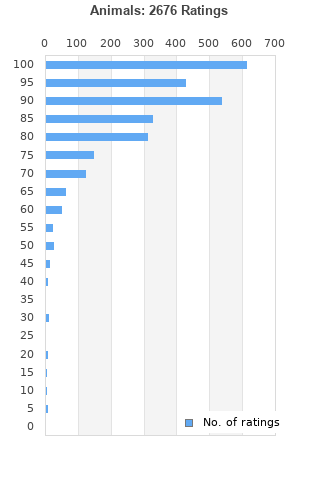 Animals is ranked 4th best out of 33 albums by Pink Floyd on BestEverAlbums.com.

The best album by Pink Floyd is The Dark Side Of The Moon which is ranked number 2 in the list of all-time albums with a total rank score of 98,072. 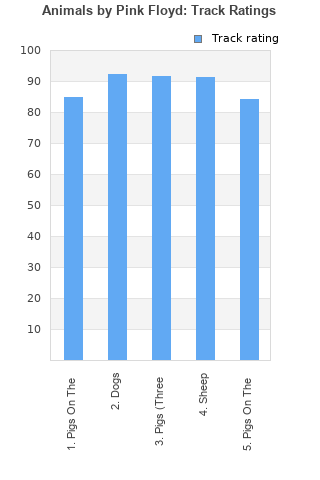 Rating metrics: Outliers can be removed when calculating a mean average to dampen the effects of ratings outside the normal distribution. This figure is provided as the trimmed mean. A high standard deviation can be legitimate, but can sometimes indicate 'gaming' is occurring. Consider a simplified example* of an item receiving ratings of 100, 50, & 0. The mean average rating would be 50. However, ratings of 55, 50 & 45 could also result in the same average. The second average might be more trusted because there is more consensus around a particular rating (a lower deviation).
(*In practice, some albums can have several thousand ratings)
This album is rated in the top 1% of all albums on BestEverAlbums.com. This album has a mean average rating of 87.0/100. The trimmed mean (excluding outliers) is 87.6/100. The standard deviation for this album is 13.4.

Pigs, Dogs, Sheep & more pigs ........... a brilliant album especially the track Dogs this was and still is my favourite Floyd album it hasn't aged as much as say some of their early albums from the sixties. It seamlessly runs one track into another and is best listened to as a whole.

I know it isn't the most important album in PF's discography, but I will forever defend this as their best one.

Another perfect 10/10 pink floyd album. One of my favorites from them.

Roger Waters paints a dark dystopian landscape of life in 1970's Britain where a ruthless "dog eat dog" management culture exists in order to control and subdue the general populous ruled upon by a disingenuous & corrupt political elite.
Aaah....those were the days!!!
But we can make Britain great again.....let's take back control!!
Baaaa…..baaaa...

Your feedback for Animals