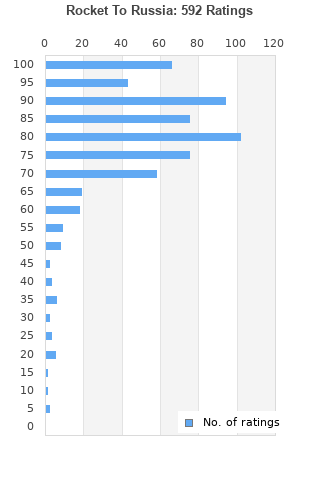 Rocket To Russia is ranked 2nd best out of 24 albums by Ramones on BestEverAlbums.com.

The best album by Ramones is Ramones which is ranked number 217 in the list of all-time albums with a total rank score of 8,416. 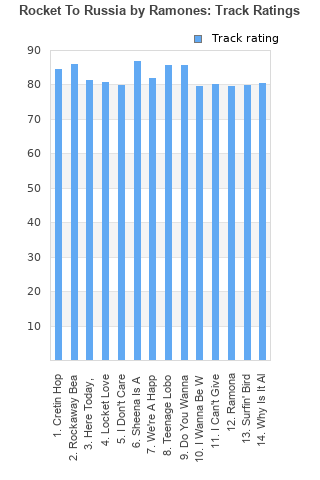 Rating metrics: Outliers can be removed when calculating a mean average to dampen the effects of ratings outside the normal distribution. This figure is provided as the trimmed mean. A high standard deviation can be legitimate, but can sometimes indicate 'gaming' is occurring. Consider a simplified example* of an item receiving ratings of 100, 50, & 0. The mean average rating would be 50. However, ratings of 55, 50 & 45 could also result in the same average. The second average might be more trusted because there is more consensus around a particular rating (a lower deviation).
(*In practice, some albums can have several thousand ratings)
This album is rated in the top 1% of all albums on BestEverAlbums.com. This album has a Bayesian average rating of 81.2/100, a mean average of 80.0/100, and a trimmed mean (excluding outliers) of 81.3/100. The standard deviation for this album is 15.8.

This album isn't as iconic as its predecessor, but in terms of quality I think this one is better. I don't like most of the Ramones music, but here I managed to find a couple of good tracks: Sheena Is A Punk Rocker, Do You Wanna Dance. I really like instrumentals on this one, unfortunately like in most cases with Ramones I dislike the lyrical content which ruins listening experience for me.

I really dont feel this is a very consistent record, worth more for the highlights (Rockaway Beach and Sheena is a Punk Rocker are perfect and who can dismiss We're a Happy Family).

An album packed full of short and energetic songs that never really give you a chance to catch your breath and I love it. The songs are infectious and so catchy that they are almost irresistible. The guitar is high paced and when you match that with the frantic drums you get a deadly combo. Then there is the unique vocal which gets every chorus jammed in your head whether you like it or not. However, there are a few weaker tracks that don't have as good a hook as the others but the songs are too short to really dwell on these. Another criticism is the simplicity as there isn't much to explore beyond the base layer which is very similar to their debut. Overall, a lot of fun and a very enjoyable record to sing along to.

I like this more than the debut, slightly refined playing and sonically better.
The songs are far more catchier and fun, This album rocks.

The Ramones started strong with their debut album, but this third album is (a little bit) better, I think. No bad tracks. "Here Today, Gone Tomorrow" stands out as an oddball, but it's fine. Includes a couple of good covers, and the rock never stops. 5 of these appear on their greatest hits (and also RamonesMania) comp, but they could have included more.

Every bit as solid as the more renowned debut album.

Ramones 3rd album completes the legendary trilogy with the original lineup. The sound has more of a surfer vibe this time around but as usual the songs are fast and the lyrics are cleverly cynical.

As good as the debut!

Your feedback for Rocket To Russia