Bat Out Of Hell (studio album) by Meat Loaf 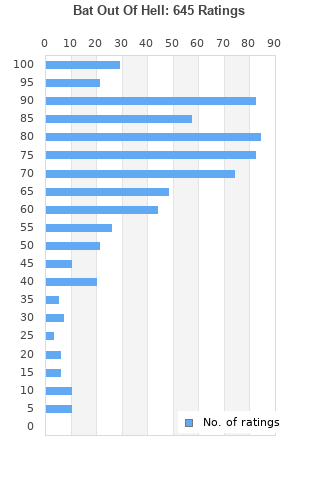 MEAT LOAF - 2 X CD ALBUM BUNDLE - BAT OUT OF HELL / BAT OUT OF HELL II
Condition: Very Good
Time left: 49m 17s
Ships to: Worldwide
£3.95
Go to store
Product prices and availability are accurate as of the date indicated and are subject to change. Any price and availability information displayed on the linked website at the time of purchase will apply to the purchase of this product.  See full search results on eBay

Bat Out Of Hell is ranked as the best album by Meat Loaf. 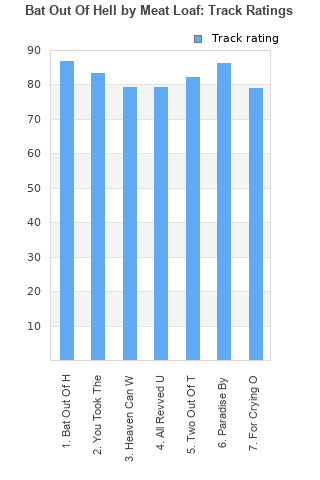 Bat Out Of Hell rankings

Bat Out Of Hell collection

Bat Out Of Hell ratings

Rating metrics: Outliers can be removed when calculating a mean average to dampen the effects of ratings outside the normal distribution. This figure is provided as the trimmed mean. A high standard deviation can be legitimate, but can sometimes indicate 'gaming' is occurring. Consider a simplified example* of an item receiving ratings of 100, 50, & 0. The mean average rating would be 50. However, ratings of 55, 50 & 45 could also result in the same average. The second average might be more trusted because there is more consensus around a particular rating (a lower deviation).
(*In practice, some albums can have several thousand ratings)
This album has a Bayesian average rating of 71.3/100, a mean average of 70.3/100, and a trimmed mean (excluding outliers) of 71.3/100. The standard deviation for this album is 20.7.

Bat Out Of Hell favourites

Bat Out Of Hell comments

I love this album. I never get tired of listening to it.
Incredibly good lyrics. Definitely one of the best
albums ever.

Extremely inconsistent album. Some absolutely amazing songs that sit along with some very forgettable tracks. Bat Out of Hell and Paradise By The Dashboard Light are undeniably the two best, but most of the rest are tracks you listen to once and probably won't purposely put on again.

Every song on the album is incredible.
great lyrics, great voice, great music.
I loved every minute of it.

This album might sound overblown for some but I still think it is a great album. Best tracks: you too the words out of my mouth, paradise by the dashboard and for crying out loud

Overblown, but great fun. Bombastic, but then music often is. It's one of those albums that is hard to ignore, sounds like a rock opera soundtrack. Great album, but I admit I don't play it much now days.

Overblown crap. Hated it then. Hate it now.

Favorite Tracks:Bat Out Of Hell, Two Out Of Three Ain't Bad, Paradise By The Dashboard Light

An old girlfriend had this way back in the day and played it incessantly. Initially it wasn't my cup of tea as I was into a bit of Japan, Bauhaus and Bowie at the time, but it grew on me. So this was another album I got in 2017 to give a listen over 30 years later and again I connected with a few of the tunes - in addition to the well known tracks I also rate Paradise By The Dashboard Light.
All big ballad or rockin tunes.

Surprised at the low BEA score. One of my all-time favourite albums. Love the whole wagnerian rock aspect of it, and the whole concept/opera vibe it has. Meat Loaf and Jim Steinman's lyrics and song composition standout the most about this album.

An enjoyable concept album. Some people might find it overly operatic or dramatic, but I really enjoy the story Meatloaf and Jim Steinman created here. Meatloaf has a great voice and he brings out a lot of emotion throughout. His duet with Ellen Foley in 'Paradise" is probably the highlight of the album. Favorite tracks for me are Bat Out of Hell and Paradise by the Dashboard Light.

Your feedback for Bat Out Of Hell