Out Of The Blue (studio album) by Electric Light Orchestra Out Of The Blue by Electric Light Orchestra
Year: 1977
Overall rank: 505th 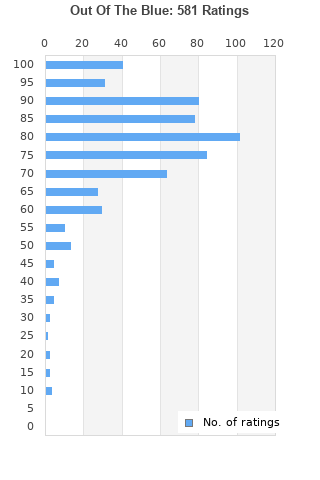 ELECTRIC LIGHT ORCHESTRA - OUT OF THE BLUE - ELO CD - MR BLUE SKY +
Condition: Very Good
Time left: 10h 58m 43s
Ships to: Worldwide
£0.99
Go to store
Product prices and availability are accurate as of the date indicated and are subject to change. Any price and availability information displayed on the linked website at the time of purchase will apply to the purchase of this product.  See full search results on eBay

Out Of The Blue is ranked as the best album by Electric Light Orchestra. 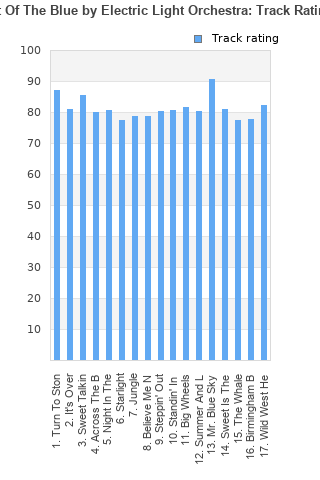 Out Of The Blue rankings

Out Of The Blue collection

Out Of The Blue ratings

Rating metrics: Outliers can be removed when calculating a mean average to dampen the effects of ratings outside the normal distribution. This figure is provided as the trimmed mean. A high standard deviation can be legitimate, but can sometimes indicate 'gaming' is occurring. Consider a simplified example* of an item receiving ratings of 100, 50, & 0. The mean average rating would be 50. However, ratings of 55, 50 & 45 could also result in the same average. The second average might be more trusted because there is more consensus around a particular rating (a lower deviation).
(*In practice, some albums can have several thousand ratings)
This album is rated in the top 3% of all albums on BestEverAlbums.com. This album has a Bayesian average rating of 78.2/100, a mean average of 77.5/100, and a trimmed mean (excluding outliers) of 78.3/100. The standard deviation for this album is 15.1.

Out Of The Blue favourites

Out Of The Blue comments

1977 was the year of many classic metal albums (Let There Be Rock and Cat Scratch Fever were my favorites then), it was of course also the year Punk came crashing in with full force (too many albums to name) and you even had some albums you could call postpunk (Marquee Moon, Blank Generation and even '77). But what is sometimes forgotten is that 1977 also spawned a number of the greatest classic rock albums ever. There was Animals, there was Aja, there was Rumors, there even was Bat Out Of Hell (don't shoot me, am I not allowed to have a guilty pleasure?). And there was this album which I loved to death at the time and of course of that very expansive Mr. Blue Sky. It's a double album so there are surely some stinkers here but boy what a gem of an upbeat album.

Just like the Beatles were reunited in the 70s

An opus of finely crafted tunes, melodic and full of counter melodies and classic tracks, sweet talk in woman, turn to stone, its over, Mr blue sky, across the border all irresistible

I particularly love Side 3 AKA ‘Concerto for a Rainy Day’ a four-track musical suit based on weather and how it affects mood comprising “Standin’ in the Rain” , “Big Wheels” , “Summer and Lightening” and ending with “Mr.Blue Sky” and the Vocoder “Please turn me over” voice as the needle runs out

One of those any day any time any mood type albums

Progressive pop done right. Concise, yet winding. At 70 minutes with 17 tracks, Out of the Blue may seem bloated on the surface, but it goes by rather quickly when you examine the quality of the songwriting. Jeff Lynne is a master at writing catchy hooks and chord progressions, and he's amazing at putting a twist on what is considered conventional. Mr. Blue Sky is the obvious highlight of the album, but songs like Turn to Stone, Sweet Talkin' Woman, and Wild West Hero are great as well.

I think this is a good album, but this is usually regarded as the BEST album that the E.L.O. ever made, and as a big fan I strongly disagree with that. It's the MOST E.L.O. album-the stuff before this was clearly influenced by the Beatles and the stuff after this was more experimental, but Out Of The Blue has the strings of the orchestra at their max. I love the beginning, I love the ending, I think there's a lot of mediocrity between Starlight and Mr Blue Sky.

Good Record but not their best at all!

One of my first ever albums I listened to. Steppin' Out is perfection.

Not all stellar, but all good enough to justify making it a double. Great album.

Your feedback for Out Of The Blue