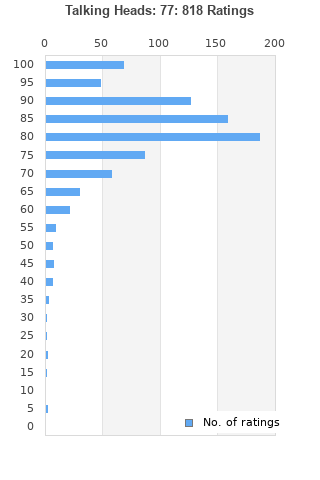 Talking Heads: 77 is ranked 5th best out of 15 albums by Talking Heads on BestEverAlbums.com.

The best album by Talking Heads is Remain In Light which is ranked number 29 in the list of all-time albums with a total rank score of 33,749. 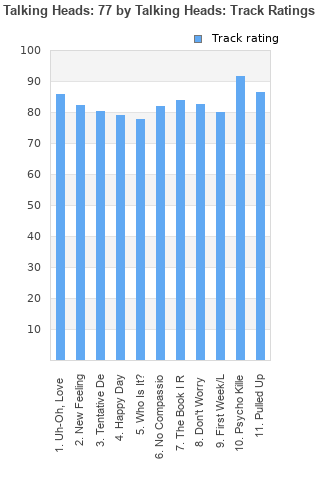 Rating metrics: Outliers can be removed when calculating a mean average to dampen the effects of ratings outside the normal distribution. This figure is provided as the trimmed mean. A high standard deviation can be legitimate, but can sometimes indicate 'gaming' is occurring. Consider a simplified example* of an item receiving ratings of 100, 50, & 0. The mean average rating would be 50. However, ratings of 55, 50 & 45 could also result in the same average. The second average might be more trusted because there is more consensus around a particular rating (a lower deviation).
(*In practice, some albums can have several thousand ratings)
This album is rated in the top 1% of all albums on BestEverAlbums.com. This album has a Bayesian average rating of 81.9/100, a mean average of 81.0/100, and a trimmed mean (excluding outliers) of 82.0/100. The standard deviation for this album is 12.9.

Great debut for Talking Heads, lyrics are insane and instrumentals are mostly great, but it's not a perfect record: Happy Day and Who Is It? could be thrown away.

I apologise to everyone on behalf of the last reviewers overly-long, rambling, boring comment about other bands.

An interesting and funky album. A very cohesive album tied together by the band's unity and a general aesthetic of absurdity. The songwriting is exceptionally creative and the music can be held to the same standard for most of the album. The lyrics can get a little distracting at times and the instrumentation is a little lacking at points. My favorite songs are "Who Is It?" and "The Book I Read".

Favorite Tracks:The Book I Read, Don't Worry About The Government

Your feedback for Talking Heads: 77