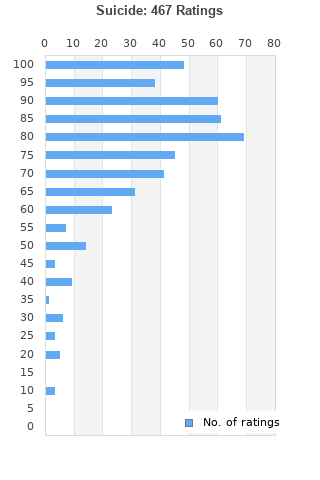 Suicide is ranked as the best album by Suicide. 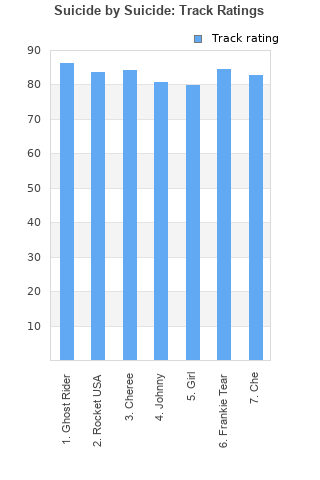 Rating metrics: Outliers can be removed when calculating a mean average to dampen the effects of ratings outside the normal distribution. This figure is provided as the trimmed mean. A high standard deviation can be legitimate, but can sometimes indicate 'gaming' is occurring. Consider a simplified example* of an item receiving ratings of 100, 50, & 0. The mean average rating would be 50. However, ratings of 55, 50 & 45 could also result in the same average. The second average might be more trusted because there is more consensus around a particular rating (a lower deviation).
(*In practice, some albums can have several thousand ratings)
This album is rated in the top 2% of all albums on BestEverAlbums.com. This album has a Bayesian average rating of 79.1/100, a mean average of 77.8/100, and a trimmed mean (excluding outliers) of 79.2/100. The standard deviation for this album is 17.5.

Experimental masterpiece. Frankie Teardrop might be the scariest song ever recorded.

I found this mostly tedious. Like what I imagine the Velvet Underground would sound like if they weren't creative geniuses.

It will make you uncomfortable, but I think it's worth it, it's quite the experience.

Suicide's self-titled LP is a unique experience. Maybe there's other stuff like this out there that I'm not aware of, but I've never heard anything like this before. Not only is Suicide unique, it's really good too. The arrangements are sparse, yet impactful.

Why do people use the word pretentious when it is obviously not applicable, and praise something for being so ahead of its time when it's just rehashing old stuff.

@antiquusxy: "They said he was a saint, but I know he ain't", literal lyrics of the song "Che". Question: Do you have your head up your ass? Even if it was positive about Che, it wouldn't be propaganda immediately. I guess some people hear a vague reference to socialist revolutionaries and think "propaganda".
Where is the patronizing tone on "Frankie Teardrop"?
The screams are top notch, unlike BEA favorites Swans and Daughters.

It sounds like rock 'n' roll on an abandoned parking lot. His echoed grunts are a mockery of everything that's tough and manly. Weakness and abandonment is what is expressed, but no proudness of it; just anger, much like punk. I had not expected that anyone would make me enjoy Velvet Underground-ish spoken word with a drone underneath; I hate both normally. But the atmosphere is so compelling, you just wanna keep listening to stay in that depressed world, but why? No wave is surely a strange movement.

Let's hear it for Frankie. I highly recommend if you've never heard this one, to get some good headphones, roll a fat one, turn the lights off and enjoy the ride.

The beginning is interesting but the rest of the album feels about the same for me , this album have a lot of potential, seems like a Joy Divison album without the variability

Your feedback for Suicide