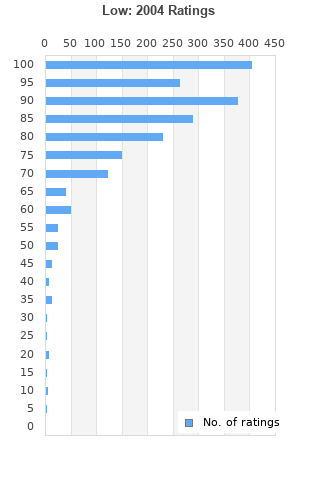 Low is ranked 3rd best out of 88 albums by David Bowie on BestEverAlbums.com.

The best album by David Bowie is The Rise And Fall Of Ziggy Stardust And The Spiders From Mars which is ranked number 9 in the list of all-time albums with a total rank score of 57,701. 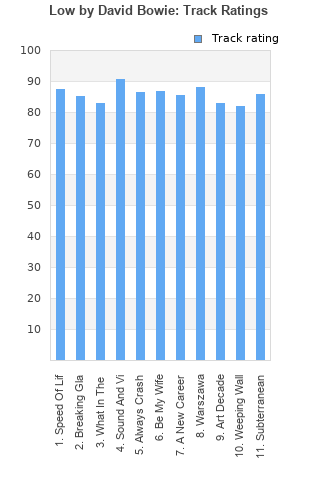 Rating metrics: Outliers can be removed when calculating a mean average to dampen the effects of ratings outside the normal distribution. This figure is provided as the trimmed mean. A high standard deviation can be legitimate, but can sometimes indicate 'gaming' is occurring. Consider a simplified example* of an item receiving ratings of 100, 50, & 0. The mean average rating would be 50. However, ratings of 55, 50 & 45 could also result in the same average. The second average might be more trusted because there is more consensus around a particular rating (a lower deviation).
(*In practice, some albums can have several thousand ratings)
This album is rated in the top 1% of all albums on BestEverAlbums.com. This album has a Bayesian average rating of 86.0/100, a mean average of 85.0/100, and a trimmed mean (excluding outliers) of 86.0/100. The standard deviation for this album is 14.2.

This is definitely one of the greatest Bowie's albums. I like every single track on here and I think that experimental elements worked really well.

I know that this record is cited as a major influence on several great subsequent bands. However, knowing that this album was reportedly influenced by Northern Europe in the 1970s makes it a bit…remote. Additionally, Bowie’s primary talents in songwriting lie with his voice and lyrics. Which are frequently absent from this album.

Tough to connect with, but about half the songs are beautifully done.

The ultimate tale of two halves. What strikes you immediately on the first half is the immediacy of the album and Bowie tries to cram in as many musical ideas as possible in to one side of music and achieves this brilliantly. The second half of the record is a challenge with the pairing of Eno and Bowie in full force with the stark, brooding instrumentals showing a completely different side of the mind of David Bowie and the evolution of a project that is seriously flexing the talent and ambition available.

Love this album for the musical experimentation, somewhat more accessible than some of his work.

My favourite Bowie record, mainly for it's sonic experimentation and just how ahead of it's time it was

Its a good album, completely different to what he done before and brave move on his behalf. I am not that keen on the album , their is no track that i do not dislike . The only great track on the album is Sound And Vision.

Your feedback for Low