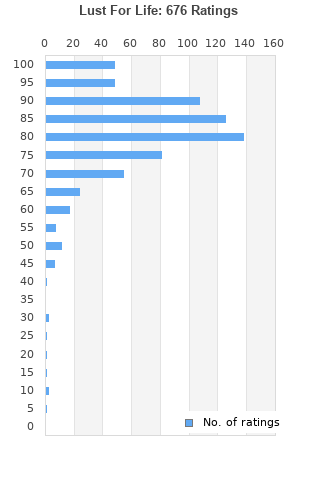 Lust For Life is ranked as the best album by Iggy Pop. 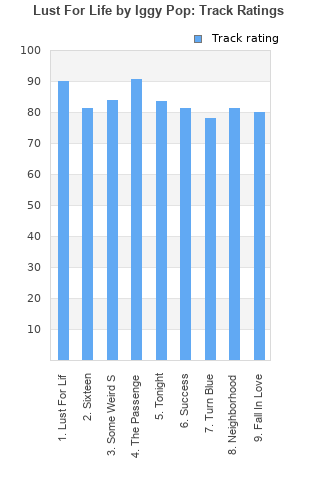 Rating metrics: Outliers can be removed when calculating a mean average to dampen the effects of ratings outside the normal distribution. This figure is provided as the trimmed mean. A high standard deviation can be legitimate, but can sometimes indicate 'gaming' is occurring. Consider a simplified example* of an item receiving ratings of 100, 50, & 0. The mean average rating would be 50. However, ratings of 55, 50 & 45 could also result in the same average. The second average might be more trusted because there is more consensus around a particular rating (a lower deviation).
(*In practice, some albums can have several thousand ratings)
This album is rated in the top 1% of all albums on BestEverAlbums.com. This album has a Bayesian average rating of 81.2/100, a mean average of 80.6/100, and a trimmed mean (excluding outliers) of 81.4/100. The standard deviation for this album is 13.0.

Great hugely Bowie-influenced record, Tonight sounds like it could be Bowie's song.
Unfortunately not all tracks are as good as Lust For Life and The Passenger, there are some really bad ones lyrically: Sixteen or melodically: Turn Blue.

Maybe my favorite ever album. Made by a heroin addict who doesn't try to hide the fact, very painful and honest. My top songs are some of the least talked about: Some Weird Sin has a brilliant riff, Tonight sounds beautiful while telling a depressing narrative, and Turn Blue is one of the most aggressively unpleasant sounding things I've ever heard. All 3 are brutal reflections of addiction. It's great.

If for no other reason than the title track and The Passenger. I've loved Iggy for years especially when he delivers in that deep dis-interested baritone

Great album. Bowie obviously had a large hand in this, which would be a downside for most, but not for Mr. Iggy Pop. He has personality and bravado to spare, making this entire album his own and resulting in a very enjoyable album.

Amazing album right from the first track. Top songs are Lust for Life, The Passenger & Success but the entire album rocks!

This is a Bowie album sing by Iggy , very good album after the 3 with Stooges

Ian Curtis killed himself after listening to The Idiot, maybe if he had listened to this one, he'd still be kicking it.


Now the Idiot is a good album, but this one just kicks with life, Iggy's on fire and the band are just fanning the flames. Falls apart slightly near the end, but ends with a good closer. Almost perfect

Your feedback for Lust For Life