The Clash (studio album) by The Clash 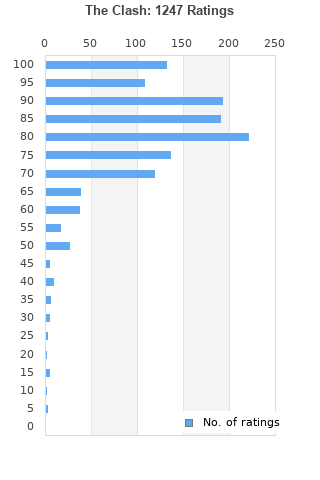 The Clash is ranked 2nd best out of 18 albums by The Clash on BestEverAlbums.com.

The best album by The Clash is London Calling which is ranked number 19 in the list of all-time albums with a total rank score of 44,457. 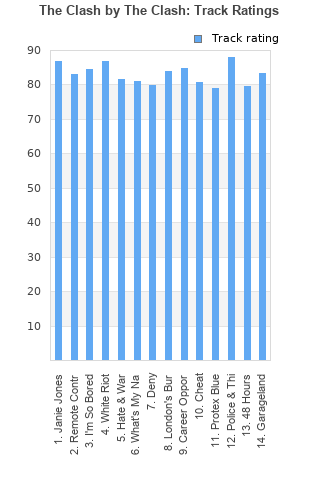 Rating metrics: Outliers can be removed when calculating a mean average to dampen the effects of ratings outside the normal distribution. This figure is provided as the trimmed mean. A high standard deviation can be legitimate, but can sometimes indicate 'gaming' is occurring. Consider a simplified example* of an item receiving ratings of 100, 50, & 0. The mean average rating would be 50. However, ratings of 55, 50 & 45 could also result in the same average. The second average might be more trusted because there is more consensus around a particular rating (a lower deviation).
(*In practice, some albums can have several thousand ratings)
This album is rated in the top 1% of all albums on BestEverAlbums.com. This album has a Bayesian average rating of 81.8/100, a mean average of 80.9/100, and a trimmed mean (excluding outliers) of 81.8/100. The standard deviation for this album is 14.4.

First album by The Clash is great for a debut, they represent here more politically charged punk rock than Ramones. This project is mostly consistent, but two stinkers are Cheat and Protex Blue. Police & Thieves show what was yet to come.

Never will the music be the same and as disturbing to the general adult audiences after this.
Classic and groundbreaking album...

Police & Thieves was a good surprise, love that one

Tighter than London Calling, but with fewer peaks.

My rating is for the US version as well, which is a great improvement over the UK one.

They removed the weakest track (Cheat) and replaced the second weakest song (Protex Blue) with the rather similar yet far better sounding Jail Guitar Doors.
More than that tough, they added two of their greatest numbers, White Man in Hammersmith Palace, a reggae inspired mellower yet still angry protest song, and the fantastic I Fought the Law, easily one of the greatest covers of all times.

Clash City Rockers is not as great of an opener as Janie Jones, but then again few songs are, and together with Complete Control and the above mentioned White Man, they add more needed complexity and diversity to the track list, thus linking their debut better musically with the soon to come London Calling.

You still have the punk bangers intact tough, with the exception of Deny, one of my favorites from the UK version and the super catchy 48 Hours, which were removed. :(

Overall tough, while their UK version is one of the better punk debuts, the US tracklist turned this into punk's first genuine masterpiece.

The best punk rock album ever? I think so. Consistently fun, snarky, and in-your-face, the very essence of punk is embodied within every second of The Clash's self-titled debut.

Hits you like a tornado. This is what rock sounds like when it's pushing all the barriers. Scorching guitars , snarling vocals , and very very intelligent lyrics which were a Clash trademark. They would equal this album a couple of times but never surpass it.

I like the U.S. release w/ Clash City Rockers. Fantastic rebellious punk album. Other notable tracks are Janie Jones, I'm so Bored with the U.S.A, London's Burning & Career Opportunities. A must for all punk fans.

Your feedback for The Clash