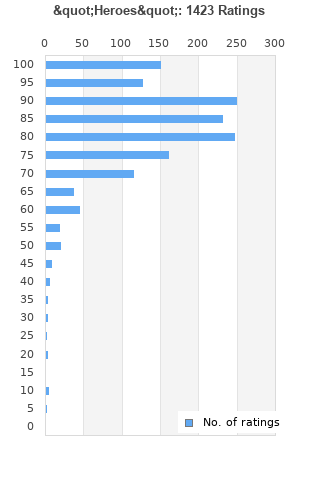 "Heroes" is ranked 6th best out of 88 albums by David Bowie on BestEverAlbums.com.

The best album by David Bowie is The Rise And Fall Of Ziggy Stardust And The Spiders From Mars which is ranked number 9 in the list of all-time albums with a total rank score of 57,024. 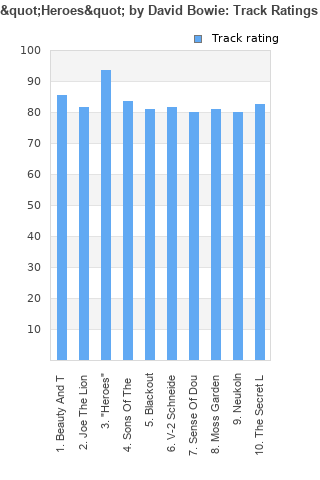 Rating metrics: Outliers can be removed when calculating a mean average to dampen the effects of ratings outside the normal distribution. This figure is provided as the trimmed mean. A high standard deviation can be legitimate, but can sometimes indicate 'gaming' is occurring. Consider a simplified example* of an item receiving ratings of 100, 50, & 0. The mean average rating would be 50. However, ratings of 55, 50 & 45 could also result in the same average. The second average might be more trusted because there is more consensus around a particular rating (a lower deviation).
(*In practice, some albums can have several thousand ratings)
This album is rated in the top 1% of all albums on BestEverAlbums.com. This album has a Bayesian average rating of 82.8/100, a mean average of 82.2/100, and a trimmed mean (excluding outliers) of 82.9/100. The standard deviation for this album is 13.1.

jkjk The title track is the best he ever made

Great Bowie album, I especially like Beauty And The Beast, title track, Blackout and The Secret Life Of Arabia. I think that instrumentals in the second half are mostly good too and they intenify haunting atmosphere of a record.

There are some real highlights on this album - obviously the title track (which is one of Bowie's best), Blackout, Joe The Lion and The Secret Life Of Arabia. But the rest of the album is just filler - the string of boring instrumentals in the middle of the album really turn this into a bit of a drag. And some of the tracks on the album are annoyingly similar to each other. But the highlights of the album save its rating for me. It's just about tolerable.

Great album, never understood the mass appeal of the title track, it's great but not amazing in my opinion. The album still holds up as one of the strongest in Bowies catalogue.

Great album, instrumentals and all. Easily the best of the Berlin trilogy.
Best song(s): Beauty and the Beast; Heroes; Blackout; Neuköln; The Secret Life of Arabia

The conventional and the experimental sides are more balanced than in Low.

Such a mysterious, dark ambient, yet it's an incredibly entertaining record. My fav Bowie album, to me it really goes beyond music.

Starts off well. New production . New style vocal from Bowie. Some superb guitar work from Robert Fripp. Then it slowly but steadily becomes boring after V2 Schneider. The rest sounds like someone only half-trying but clever enough to make it sound more profound than it actually is. Perfect example of this is Secret Life of Arabia.

I like Ziggy Stardust more but this is a good album solid song except one Heroes is Outstanding. I enjoy the music I listen.

Your feedback for "Heroes"