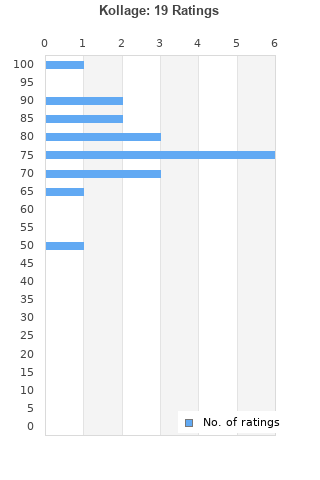 Kollage, Bahamadia - (Compact Disc)
Condition: Very Good
Time left: 15d 13h 26m 57s
Ships to: Worldwide
$15.00
Go to store
Product prices and availability are accurate as of the date indicated and are subject to change. Any price and availability information displayed on the linked website at the time of purchase will apply to the purchase of this product.  See full search results on eBay 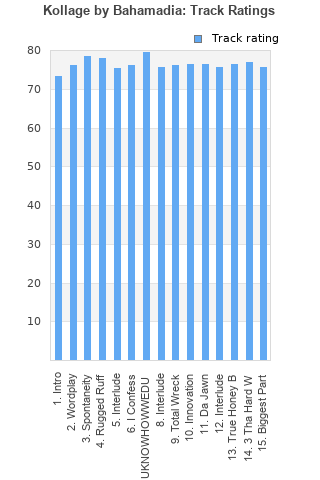 Rating metrics: Outliers can be removed when calculating a mean average to dampen the effects of ratings outside the normal distribution. This figure is provided as the trimmed mean. A high standard deviation can be legitimate, but can sometimes indicate 'gaming' is occurring. Consider a simplified example* of an item receiving ratings of 100, 50, & 0. The mean average rating would be 50. However, ratings of 55, 50 & 45 could also result in the same average. The second average might be more trusted because there is more consensus around a particular rating (a lower deviation).
(*In practice, some albums can have several thousand ratings)
This album is rated in the top 8% of all albums on BestEverAlbums.com. This album has a Bayesian average rating of 76.2/100, a mean average of 77.9/100, and a trimmed mean (excluding outliers) of 77.9/100. The standard deviation for this album is 10.6.

I can't say there's a female rapper that I consider belonging among my absolute favorites, as I usually find it hard to connect/relate with them. But there is one exception to the above rule and it's Bahamadia - with all due respect to some other undoubtedly great femcees. I just love her delivery, it's so natural, so effortless. Also, the production does a good job of showcasing this even further. It creates a warm and cozy atmosphere with a soul-based background. It draws you in slowly but surely in a hypnotising and irresistible manner and then she delivers the finals blow with her vocals. It might seem that she lacks energy, but that's exactly the point (though it has to be said that it's not monotonous all the way through there are more "active" moments, for example Rugged Ruff or Total Wreck). All the guest are fine, both Da Jawn and 3 Tha Hard Way are deservedly some of the best tracks of the album due to their contributions, but I prefer listening to Bahamadia to be honest. It's not their fault, it's just that she is the unquestionable star, so captivating. The lyrics don't matter that much, because everything else is excellent, but they happen to be great, too, both as standalone lines or verses ("Spits the riddles like phlegm Loose with my lyrics like I double jointed them Twist and I bend, common episodes past freak modes The monstrous bass beneath my pace be like morse code Slash, beep, slash, beep, scanners Zero in to the system in your jeeps I'm out there with Kool Keith and Ced-Gee and De La Inventors of my third seeing eye The futuristic vision, I'm not among loony nut cakes upon a mission I gets in where I fit in, 'cause life's too short So you could all label me weirdo, but yo I know it's talent") as well as when it comes to storytelling that runs through a whole track, with True Honey Buns (Da Freak Shit) being a prime example of this. Good luck trying to spot the highlights, almost every track is one. Anyway, apart from the ones I already mentioned at various points (Rugged Ruff/Total Wreck/Spontaneity/True Honey Buns (Da Freak Shit)/Da Jawn/3 Tha Hard Way), it has to be I Confess, UKNOWHOWWEDU, Innovation. Yeah, you get the idea.

Your feedback for Kollage