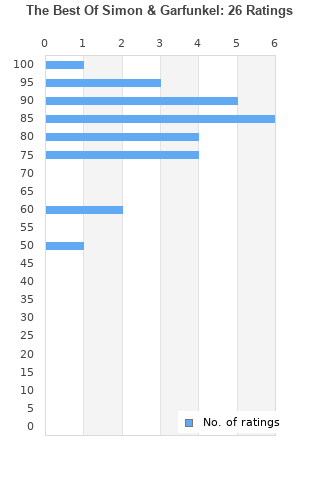 The best album by Simon & Garfunkel is Bridge Over Troubled Water which is ranked number 113 in the list of all-time albums with a total rank score of 14,005.

Listen to The Best Of Simon & Garfunkel on YouTube 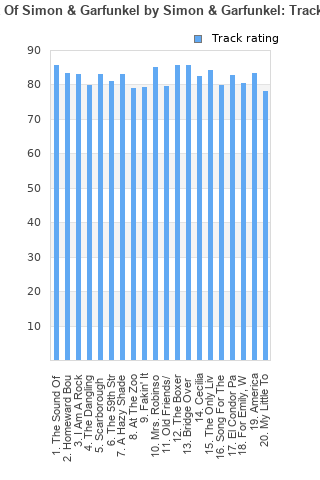 The Best Of Simon & Garfunkel rankings

The Best Of Simon & Garfunkel collection

The Best Of Simon & Garfunkel ratings

Rating metrics: Outliers can be removed when calculating a mean average to dampen the effects of ratings outside the normal distribution. This figure is provided as the trimmed mean. A high standard deviation can be legitimate, but can sometimes indicate 'gaming' is occurring. Consider a simplified example* of an item receiving ratings of 100, 50, & 0. The mean average rating would be 50. However, ratings of 55, 50 & 45 could also result in the same average. The second average might be more trusted because there is more consensus around a particular rating (a lower deviation).
(*In practice, some albums can have several thousand ratings)
This album is rated in the top 2% of all albums on BestEverAlbums.com. This album has a Bayesian average rating of 79.6/100, a mean average of 82.3/100, and a trimmed mean (excluding outliers) of 82.3/100. The standard deviation for this album is 11.8.

The Best Of Simon & Garfunkel favourites

The Best Of Simon & Garfunkel comments

Another year another Simon & Garfunkel compilation. The music, of course, is very nearly flawless - and a couple of unexpected tracks from side two of 'Bookends' - just so it's different to all the others. But who the hell needs this at this stage of the day? I'd loved to know how many copies this actually sold as well.

Your feedback for The Best Of Simon & Garfunkel