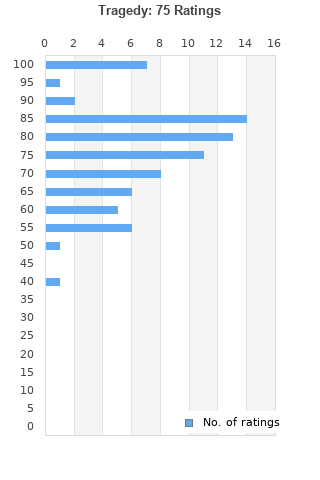 Tragedy is ranked 4th best out of 7 albums by Julia Holter on BestEverAlbums.com.

The best album by Julia Holter is Have You In My Wilderness which is ranked number 617 in the list of all-time albums with a total rank score of 3,056. 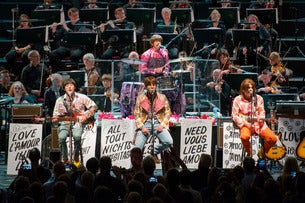 It Was 50 Years Ago Today:Tribute To The Beatles Rubber Soul, Revolver
Chevalier Theatre, Medford, United States. 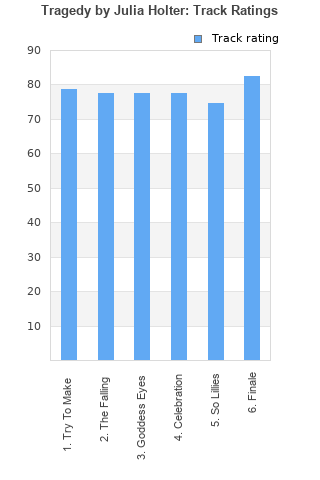 #
Track
Rating/Comments
1.
Try To Make Yourself A Work Of Art
Rating: 80 (13 votes)Comments:

Rating metrics: Outliers can be removed when calculating a mean average to dampen the effects of ratings outside the normal distribution. This figure is provided as the trimmed mean. A high standard deviation can be legitimate, but can sometimes indicate 'gaming' is occurring. Consider a simplified example* of an item receiving ratings of 100, 50, & 0. The mean average rating would be 50. However, ratings of 55, 50 & 45 could also result in the same average. The second average might be more trusted because there is more consensus around a particular rating (a lower deviation).
(*In practice, some albums can have several thousand ratings)
This album is rated in the top 6% of all albums on BestEverAlbums.com. This album has a Bayesian average rating of 76.5/100, a mean average of 76.9/100, and a trimmed mean (excluding outliers) of 76.9/100. The standard deviation for this album is 12.9.

so far it's contender for the best album of the 10's. It really does play, like a play. It unfolds each scene with its own theme. The bedroom aesthetic is authentic, original and makes the lo-fi art pop musique concrete more convincing. Favorite album of the 10's so far.

Evoking dream-pop atmospherics and an undercurrent of psychedelia, Holter expands upon the aesthetics of Julianna Barwick's 'The Magic Place', to create an album that in many ways is not unlike a postmodern amalgam of 'Desertshore', 'Lorca' and 'Rock Bottom'. The sound of piano and harpsicord allied to dense minimilistic electronic drones, techno beats and angelic vocals that seem to drift as if suspended from gravity, result in a unique cosmic-ambient work of extraordinary emotional depth and beauty.

Your feedback for Tragedy