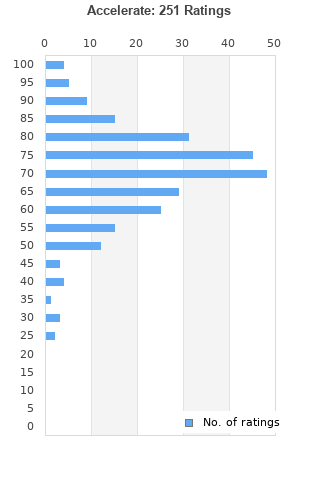 Accelerate is ranked 14th best out of 35 albums by R.E.M. on BestEverAlbums.com.

The best album by R.E.M. is Automatic For The People which is ranked number 52 in the list of all-time albums with a total rank score of 21,681. 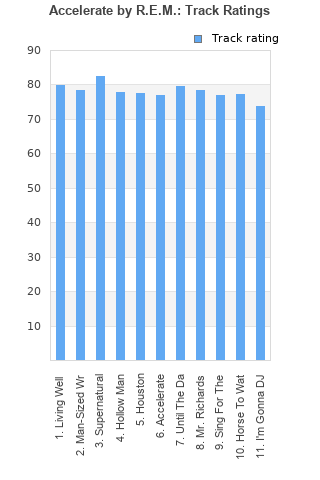 Rating metrics: Outliers can be removed when calculating a mean average to dampen the effects of ratings outside the normal distribution. This figure is provided as the trimmed mean. A high standard deviation can be legitimate, but can sometimes indicate 'gaming' is occurring. Consider a simplified example* of an item receiving ratings of 100, 50, & 0. The mean average rating would be 50. However, ratings of 55, 50 & 45 could also result in the same average. The second average might be more trusted because there is more consensus around a particular rating (a lower deviation).
(*In practice, some albums can have several thousand ratings)
This album has a Bayesian average rating of 70.2/100, a mean average of 69.7/100, and a trimmed mean (excluding outliers) of 70.0/100. The standard deviation for this album is 13.3.

A latter day rocker of an album from them. "Living Well Is The Best Revenge" ranks among my favorite R.E.M. songs.

I was a bit disappointed at the time this was released, but I always had very high expectations of this band. I like it more now. The songs are strong, it's consistent and there's plenty of energy. Not quite up to their best: there's nothing I really love on this album. Still good though.

It's sad to see such a great artist pigeon holed. As a life long R.E.M. fan, seeing their stuff on MTV growing up, etc. This is better than Monster in my opinion. I feel it is the right level of pop, edge, and punk rock. I feel it is every bit their sound as any other album. This is why this band is great - they can do quality soundscapes in lots of different directions. I think it is a waste to say, well this isn't AFTP or whatever... of course it isn't. It is Accelerate and I think it's great. I think it has the political side of R.E.M. I like. It has the philosophical side. And yes the darker emotional side is less than in the past, and that's actually what I love about it, it's emotion is a happy energy, kind of like when they first debuted on TV with David Letterman and Radio Free Europe. idk... that's my take - sad to see good work like this considered low par.

A rocking and exciting album. Interesting how they managed to still rock out at that point into their career. Living Well, Supernatural, Until the Day is Done, Mr. Richards, and Man-Sized Wreath are my favorites

REM go back to their rock roots with a short, fiery punk album. It's quite enjoyable, but it's still obvious listening to the record, that it's a bunch of middle-aged millionaires trying to recapture their youth, and maybe some credibility. It starts of well with, living well is the best revenge. After the sonics of their last three albums, it's good to hear the band rocking again. Man sized wreath, is ok, and, supernatural superserious, is fine, but it's not classic REM. The best song on here is, Mr. Richards, with, horse to water, also good. Until the day is done, is a good track, but again it's just not how it used to be. It ends with the silly fun of, I'm gonna DJ, which is enjoyable enough. And that's it, just after the half hour mark, the record ends. It's definitely one of the better later REM albums, but it's nowhere near their best, but at least it has an energy about it.

After four slower paced albums, this one is full throttle, and is really quite good, but far off from the glory days


I am afraid I am not a REM purist - Bill Berry leaving the band was not the end of REM's greatness for me....... And this album shows why

It is one of the most up beat and energetic rem offerings since .... Well, ever

There isn't really a standout track or tracks on it , and that's because all of them are fantastic rock songs

Understated to say the least

R.E.M.'s great comeback. Accelerate is generally underrated, but it's probably the best album since Automatic for the People. It's everything that the post-Berry albums were missing: energy, rougher guitar work, true rock, with R.E.M.'s signature always present.

Just when I thougth they were running out of steam they put out this youthful, energetic album full of catchy rock songs.

Your feedback for Accelerate