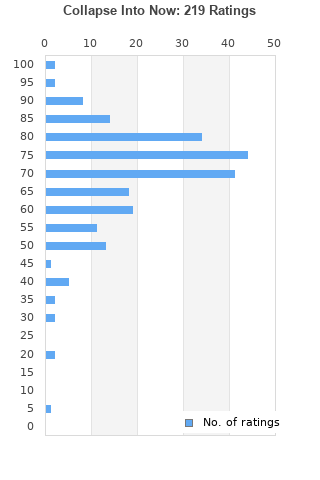 Collapse Into Now by R.E.M. (CD, 2010, Warner Bros.) RARE SAMPLER EUC! SEE PICS!
Condition: Very Good
Time left: 1d 16h 35m 31s
Ships to: Worldwide
$16.62
Go to store
Product prices and availability are accurate as of the date indicated and are subject to change. Any price and availability information displayed on the linked website at the time of purchase will apply to the purchase of this product.  See full search results on eBay

Collapse Into Now is ranked 15th best out of 35 albums by R.E.M. on BestEverAlbums.com.

The best album by R.E.M. is Automatic For The People which is ranked number 56 in the list of all-time albums with a total rank score of 22,253. 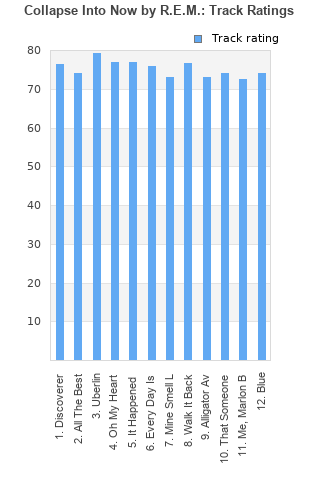 Rating metrics: Outliers can be removed when calculating a mean average to dampen the effects of ratings outside the normal distribution. This figure is provided as the trimmed mean. A high standard deviation can be legitimate, but can sometimes indicate 'gaming' is occurring. Consider a simplified example* of an item receiving ratings of 100, 50, & 0. The mean average rating would be 50. However, ratings of 55, 50 & 45 could also result in the same average. The second average might be more trusted because there is more consensus around a particular rating (a lower deviation).
(*In practice, some albums can have several thousand ratings)
This album has a Bayesian average rating of 70.6/100, a mean average of 69.9/100, and a trimmed mean (excluding outliers) of 70.5/100. The standard deviation for this album is 14.0.

I really like this album even though stylistically it is all over the place (but then again so was AFTP). The first two songs sound like outtakes from Accelerate, and actually fit better on that album than this one, being better than some of the songs on Accelerate, and would have made it a full album, instead of a slight album of 11 short songs. Songs #3 thru 10 are very good especially Uberlin, It Happened Today and That Someone is You. The only problem with It Happened Today and That Someone is You is they are too short - even after having heard them many times I always feel a little disappointed that they end when they do. Track #11 Marlon Brando is not my favorite but it is eyeopening that REM would do such an obvious tribute to Neil Young - this song is essentially a sequel to Pocahontas. The last song Blue does not do much for me and leaves me morose about the fact that they broke up. What I've done is added Hallelujah and We All Go Back To Where We Belong (which were recorded immediately after this album and appear on the compilation Part Lies, Part Heart...) at the end of this album on my playlist. That makes it an even better sendoff for a fantastic band, that I'm still hoping one day will get back together.

I love how this album ends the way it starts... I dunno, it's a super simple idea, but I'll be honest, it gave me chills.

These songs really grew on me to be quality:
Discoverer
Oh My Heart
It Happened Today
Walk It Back
Alligator Aviator...

Nice goodbye. No it's not their magnum opus peak of their career... would you really expect that from anyone after doing this for 30 years? The lyrics for the most part (some were lame) were indeed some very thought provoking.

It's almost impossible to not be satisfied with a work by R.E.M. but this album was the closest I got. Blue and Überlin are the two standout tracks but everything else seems like a poor attempt to replicate older material, if you listen carefully you can hear the ghosts of songs from the period of AFTP to Accelerate. Most of these songs are misses rather than hits but R.E.M. are so talented in what they do that even their misses are decent songs, still my least favorite album by the boys.

This is a nice way to end their career, not a great album, but it's good

In hindsight, Collapse wanted to be a travel in various R.E.M. styles to celebrate a career close to the end.
Result: each song is the draft of its corresponding inspiring old song

A nice way to end their career. After rocking on Accelerate, Collapse Into Now is more acoustic and reflective of their earlier work. Graceful and on their own terms, like their entire career.

As everyone has already mentioned this is not the best REM album but by no means the worst. It was their last studio album and a good send off for a great band. The first half is stronger and the best songs are the first 6 tracks although Walk It Back is also a good song.

A really good album, R.E.M. went back to their traditional sound, but with a different approach. I think they could have go on making excellent music for a lot of years, and Peter Buck's solo efforts are showing it.

Your feedback for Collapse Into Now