Rehearsing My Choir (studio album) by The Fiery Furnaces 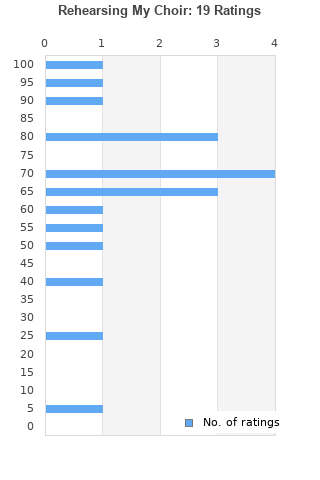 THE FIERY FURNACES REHEARSING MY CHOIR CD NEW FREE UK POST
Condition: Brand New
Time left: 4d 16h 45m 26s
Ships to: Worldwide
£5.49
Go to store
Product prices and availability are accurate as of the date indicated and are subject to change. Any price and availability information displayed on the linked website at the time of purchase will apply to the purchase of this product.  See full search results on eBay

Rehearsing My Choir is ranked 5th best out of 9 albums by The Fiery Furnaces on BestEverAlbums.com.

The best album by The Fiery Furnaces is Blueberry Boat which is ranked number 3534 in the list of all-time albums with a total rank score of 410. 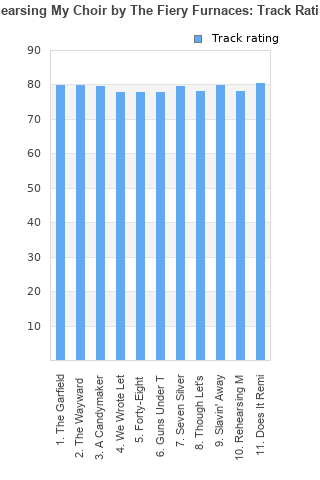 Rating metrics: Outliers can be removed when calculating a mean average to dampen the effects of ratings outside the normal distribution. This figure is provided as the trimmed mean. A high standard deviation can be legitimate, but can sometimes indicate 'gaming' is occurring. Consider a simplified example* of an item receiving ratings of 100, 50, & 0. The mean average rating would be 50. However, ratings of 55, 50 & 45 could also result in the same average. The second average might be more trusted because there is more consensus around a particular rating (a lower deviation).
(*In practice, some albums can have several thousand ratings)
This album has a Bayesian average rating of 68.7/100, a mean average of 66.1/100, and a trimmed mean (excluding outliers) of 66.1/100. The standard deviation for this album is 22.5.

Oh how I wanted to hate this record. First off, the whole premise of the record was super weird. Brother and sister have their dying grandma sing songs with them for one last good musical memory. Whether or not I was going to like this record, I didn't care, I bought it anyways because I thought it was an interesting concept. Plus I like the fiery furnaces, I don't love them, but I do like them.
The grandmother sounds like a Speak & Spell, and her singing is quirky, if you can even call it singing. I can see how it grates on people's ears. I actually really like it, it's a lot of interesting storytelling, and I think most of it is autobiographical, but just because a person sings apart, doesn't necessarily mean that happened to them, they may be singing from the other person's perspective. Anyways, it's a record that you have to listen to from front to back, and a couple times to really figure out if you like it or not, just because it's so eccentric and weird. Everybody seem to hate this record, but I thought it was pretty good. If you can go in it with an open mind, and take out the good parts about it, you will enjoy this record.

Your feedback for Rehearsing My Choir