The Soft Parade (album) by The Doors 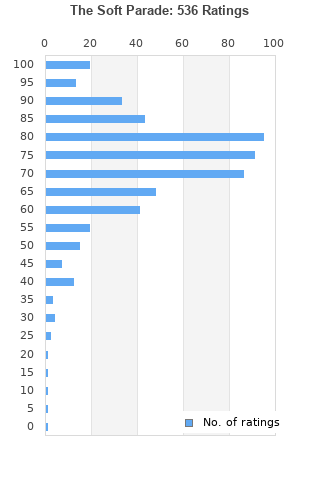 The Soft Parade is ranked 6th best out of 37 albums by The Doors on BestEverAlbums.com.

The best album by The Doors is The Doors which is ranked number 28 in the list of all-time albums with a total rank score of 37,017. 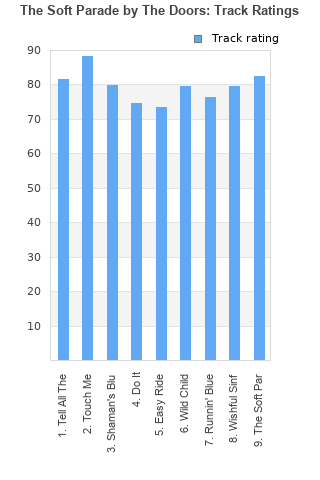 Outliers can be removed when calculating a mean average to dampen the effects of ratings outside the normal distribution. This figure is provided as the trimmed mean. A high standard deviation can be legitimate, but can sometimes indicate 'gaming' is occurring. Consider a simplified example* of an item receiving ratings of 100, 50, & 0. The mean average rating would be 50. However, ratings of 55, 50 & 45 could also result in the same average. The second average might be more trusted because there is more consensus around a particular rating (a lower deviation).
(*In practice, some albums can have several thousand ratings)
This album has a mean average rating of 72.0/100. The trimmed mean (excluding outliers) is 73.2/100. The standard deviation for this album is 14.9.

Showing latest 10 comments | Show all 22 comments | Most Helpful First | Newest First
(Only showing comments with -2 votes or higher. You can alter this threshold from your profile page. Manage Profile)

Great album despite what people can say. It’s just very different from the others. I like all the songs in it.

The Doors are trying to not fall from the cliff from all the steps back they have made in their music.

Perhaps nobody's favorite Doors record but I think "Touch Me" is a beautiful single and the title track...particularly the wicked intro...is up to Door's level genius.

Unbelievable that this album could be overall so bad, and yet produce arguably the best doors song in Touch Me. The rest of the album isn't even worth listening to IMHO.

This was a bit of a train wreck for example Tell All the People. I recommend Touch Me and The Soft Parade nothing else is too memorable but it's not awful just not up to their standard.

I don't hate this album... but its not their best

Their weakest album by far.

Too poppy for the blues fans, too bluesy for the pop fans.
But just right for me.

With the exception of 'Easy Ride', this album is pretty much a compilation of their best songs. Super solid record. Instantly on my chart, and instantly added to my vinyl collection.

Soft parade, is not a great album, but in my opinion it's a lot better than, waiting for the sun. They incorporate brass and strings into their sound, especially on songs such, tell all the people, and, touch me, both excellent. Jim Morrison sounds completely sozzled throughout the record, but it kind of suits the material. Shaman blues, and the title track are also good tracks. The soft parade, is not great but it's better than it's reputation.

Your feedback for The Soft Parade