Never For Ever (studio album) by Kate Bush 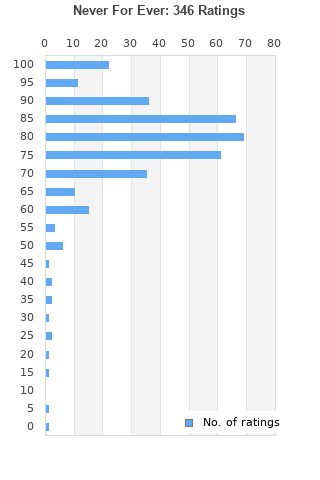 CD KATE BUSH Never For Ever TOCP6462 EMI JAPAN
Condition: Like New
Time left: 7h 56m 32s
Ships to: Worldwide
$14.43
Go to store
Product prices and availability are accurate as of the date indicated and are subject to change. Any price and availability information displayed on the linked website at the time of purchase will apply to the purchase of this product.  See full search results on eBay

Never For Ever is ranked 6th best out of 16 albums by Kate Bush on BestEverAlbums.com.

The best album by Kate Bush is Hounds Of Love which is ranked number 81 in the list of all-time albums with a total rank score of 19,422. 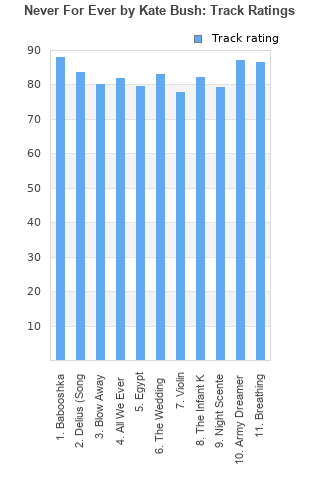 Never For Ever rankings

Never For Ever collection

Never For Ever ratings

Rating metrics: Outliers can be removed when calculating a mean average to dampen the effects of ratings outside the normal distribution. This figure is provided as the trimmed mean. A high standard deviation can be legitimate, but can sometimes indicate 'gaming' is occurring. Consider a simplified example* of an item receiving ratings of 100, 50, & 0. The mean average rating would be 50. However, ratings of 55, 50 & 45 could also result in the same average. The second average might be more trusted because there is more consensus around a particular rating (a lower deviation).
(*In practice, some albums can have several thousand ratings)
This album is rated in the top 3% of all albums on BestEverAlbums.com. This album has a Bayesian average rating of 78.3/100, a mean average of 76.9/100, and a trimmed mean (excluding outliers) of 78.5/100. The standard deviation for this album is 15.1.

Never For Ever favourites

Never For Ever comments

Glad I listened to this one. Maybe it's not as solid as TKI or as amazing as TD or HOL, but this is still a very enjoyable album full of beautiful moments and great songs.

Another very worthwhile album from Kate Bush, the best of the first three. Army Dreamers and Babooshka are great tracks, but for me the highlight is Breathing, one of my favourite tracks.

The whimsy of her first two albums collides with the avaunt guard of the next two and it is just beautiful. Diverse and interesting.

This is definitely my favorite Kate Bush album, so I was surprised to find it so low. The words “too effiminate” for a moment made me lose all faith in humankind; will there ever be a day where feminine will not mean childish or dumb or... you know the drill. And the dislikes are nice, but I see everyone saying the same thing with their ratings and charts.
But still, I don’t really get why this one is so low; it’s certainly not more feminine than her last two albums. The reason for the albums that followed to be liked by people on this site seems clear, since people here seem to have an indie fetish, and Kate apparently became more and more independent in the course of the ‘80s. I feel like this album is a bit in the middle of that process, which is why I like it so much: the production isn’t as sparse as on the following two albums and the vocals aren’t as clean as on the preceding two albums. This is Kate Bush at her weirdest and at her Kate Bush-est.

Her first six albums are all great! I enjoy them all, though this one doesn’t make my top 3.

A consistently great pop album full of Kate Bush's idiosyncrasies and lush melodies which marks a big step-up from its rushed predecessor "Lionheart".

Kate Bush's third studio album is a definite improvement on, lionheart, but it's still a slightly awkward record. Kate is getting nearer to the peaks of, the dreaming, and, the hounds of love, and though this is a much fuller album than it's predecessor, she's not quite there yet. Still, some magic moments here, especially on, babooshka, the wedding list, the infant kiss, and, army dreamers. A good LP then, but the best was yet to come.

Not her best album but not that bad. Breathing and The Wedding List are my personal favourites. I also like the first 2 tracks, but I usually skip Violin and Egypt.

Your feedback for Never For Ever