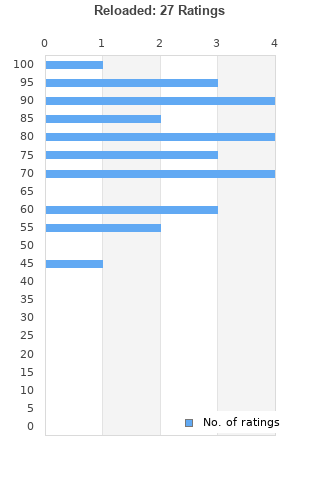 Reloaded is ranked as the best album by Roc Marciano. 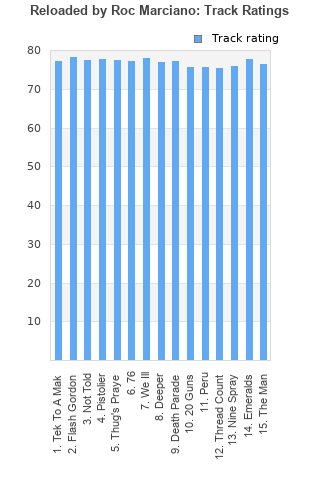 Rating metrics: Outliers can be removed when calculating a mean average to dampen the effects of ratings outside the normal distribution. This figure is provided as the trimmed mean. A high standard deviation can be legitimate, but can sometimes indicate 'gaming' is occurring. Consider a simplified example* of an item receiving ratings of 100, 50, & 0. The mean average rating would be 50. However, ratings of 55, 50 & 45 could also result in the same average. The second average might be more trusted because there is more consensus around a particular rating (a lower deviation).
(*In practice, some albums can have several thousand ratings)
This album is rated in the top 9% of all albums on BestEverAlbums.com. This album has a Bayesian average rating of 75.7/100, a mean average of 76.7/100, and a trimmed mean (excluding outliers) of 76.7/100. The standard deviation for this album is 14.4.

This album, along with his debut will go down as two of the most influential albums in the history of hip hop. Roc removed drums from beats and it sounds so good.

There isn't anybody in hip-hop (or any other genre, for that matter) who puts words together like Roc Marciano. And the production is surprisingly experimental - I don't remember a hip-hop album on which the drums were less prominent than they are here. Anyone who dismisses Roc Marciano as a Mobb Deep knockoff or '90's throwback is missing the point and just being plain lazy in their judgement. This is a cold record, but so vivid - and whilst people have lauded Kendrick's album for being so 'cohesive', I genuinely think this album is even more so. It's just amazingly crafted. Even better than his impeccable debut album. One of rap's most distinctive voices, and a fully fledged artist to boot. They are becoming rare in hip-hop, so cherish Roc Marci whilst he's here.

Your feedback for Reloaded