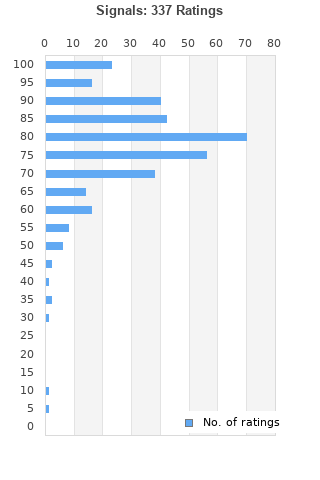 Signals is ranked 6th best out of 37 albums by Rush on BestEverAlbums.com.

The best album by Rush is Moving Pictures which is ranked number 150 in the list of all-time albums with a total rank score of 12,141. 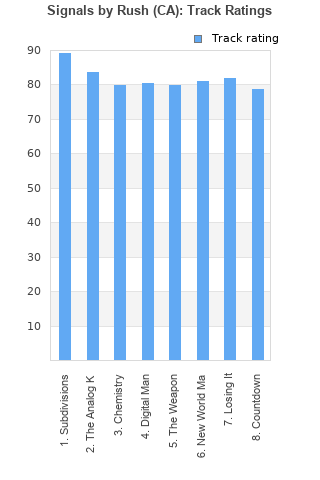 Rating metrics: Outliers can be removed when calculating a mean average to dampen the effects of ratings outside the normal distribution. This figure is provided as the trimmed mean. A high standard deviation can be legitimate, but can sometimes indicate 'gaming' is occurring. Consider a simplified example* of an item receiving ratings of 100, 50, & 0. The mean average rating would be 50. However, ratings of 55, 50 & 45 could also result in the same average. The second average might be more trusted because there is more consensus around a particular rating (a lower deviation).
(*In practice, some albums can have several thousand ratings)
This album is rated in the top 3% of all albums on BestEverAlbums.com. This album has a Bayesian average rating of 78.6/100, a mean average of 77.8/100, and a trimmed mean (excluding outliers) of 78.8/100. The standard deviation for this album is 14.1.

Still keeping the 70s rock elements, the progressive touches but adding more 80s synth and melody that they would develop further. What a great record.

Album was released in '09/'82 just when I started university. I remember the video from Subdivisions which I can identify with. The other great tracks are Analog Kid, Digital Man & New World Man. Rush started to merge more synthesizers with this release which they could get away with. This album rocks!

A great record. I love the synth interlude of Subdivisions, can listen to it over and over. The bass riff of Digital man is really groovy as well.

Lots of shocking and cool sounds, but the composing just doesn't warrant a full 100 sorry

I was disappointed when this album was first release: it's so electronic! Not heavy at all! Where's the guitar?!? I felt like my favorite band had betrayed me. As the years went by, though, I began to see the great strengths of this album. There is some stellar songwriting, lots of great layering of sound, and marvelous creation of mood. Despite being a synth-heavy product of it's time, it has held up well and in the final analysis is well in the upper half of my Rush list.

Rush's follow-up to their highest achievement, Signals moved Rush in a more electronic sound compared to their previous efforts. They are unable to match their prior achievements with this new sound, and though not the strongest phase of their career, it was still good music. Best track by far is "Subdivisions", the rest of the album is very hit and miss.

One word : Subdivisions ! Not only the best Rush song but also, I think, one of the best song ever written.

Rush moving into the 80's sound, more synths. Most Rush fans hated this turn the band took. I really liked the new direction myself. Very very good album imo. I like 7 of the 9 tracks. MEZ

Unfairly maligned by me & my friends back in the day due to their change in direction towards AOR pop rock and away from HARD prog rock with a full-on embrace of "rich" & "gorgeous" production , this album has aged incredibly well and now just sounds RICH & GORGEOUS.

Your feedback for Signals