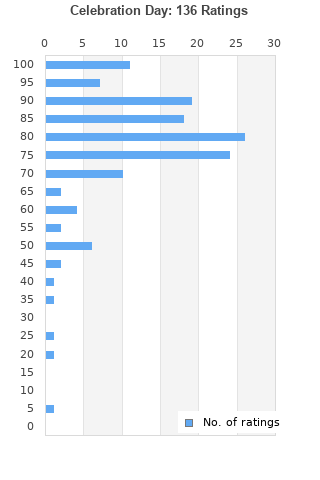 Celebration Day is ranked 14th best out of 22 albums by Led Zeppelin on BestEverAlbums.com.

The best album by Led Zeppelin is Untitled (Led Zeppelin IV) which is ranked number 11 in the list of all-time albums with a total rank score of 54,597. 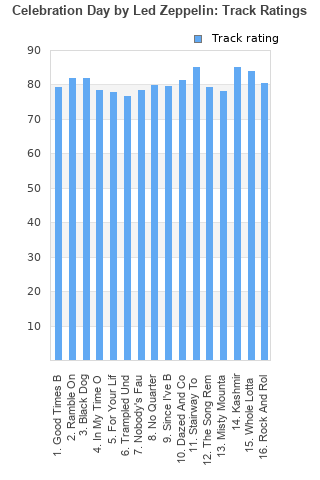 Rating metrics: Outliers can be removed when calculating a mean average to dampen the effects of ratings outside the normal distribution. This figure is provided as the trimmed mean. A high standard deviation can be legitimate, but can sometimes indicate 'gaming' is occurring. Consider a simplified example* of an item receiving ratings of 100, 50, & 0. The mean average rating would be 50. However, ratings of 55, 50 & 45 could also result in the same average. The second average might be more trusted because there is more consensus around a particular rating (a lower deviation).
(*In practice, some albums can have several thousand ratings)
This album is rated in the top 3% of all albums on BestEverAlbums.com. This album has a Bayesian average rating of 78.7/100, a mean average of 78.3/100, and a trimmed mean (excluding outliers) of 79.1/100. The standard deviation for this album is 14.3.

apart from the obvious tracks,i just dont get the fuss about led. does absolutly nothing for me. sorry

If you want a live Zeppelin album, get How the West Was Won. This one is a pass.

This album is as good as it possibly could have been imo, my very few issues with this album are all involved with the setlist. No Over the Hills and Far Away, Rain Song, or Heartbreaker. Misty Mountain Hop and Nobody's Fault But Mine could have easily been swapped out for any of those.

Yes a pretty impressive live performance considering their ages.Unfortunately for Robert once you hit fifty your voice has not the same power.Its understandable why he did not want Led Zeppelin reunion.

An enjoyable live album, but hardly essential. From an emotional stand point it works well, but musically you are just constantly reminded that the boys in the band can't cut it the way they used to. Still, you can't help but enjoy it.

My dad went to it he concert.. I wish I did! It sounds brilliant

Your feedback for Celebration Day