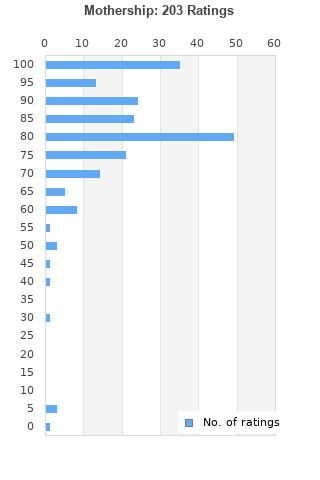 Mothership is ranked 13th best out of 22 albums by Led Zeppelin on BestEverAlbums.com.

The best album by Led Zeppelin is Untitled (Led Zeppelin IV) which is ranked number 11 in the list of all-time albums with a total rank score of 51,604. 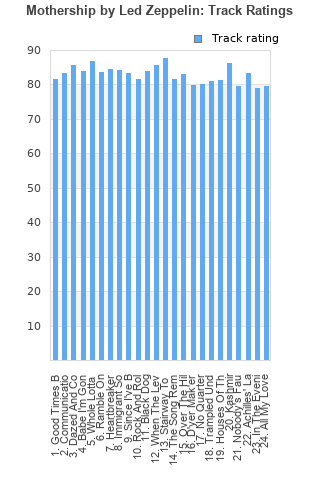 When The Levee Breaks
Rating: 87 (25 votes)Comments:

Rating metrics: Outliers can be removed when calculating a mean average to dampen the effects of ratings outside the normal distribution. This figure is provided as the trimmed mean. A high standard deviation can be legitimate, but can sometimes indicate 'gaming' is occurring. Consider a simplified example* of an item receiving ratings of 100, 50, & 0. The mean average rating would be 50. However, ratings of 55, 50 & 45 could also result in the same average. The second average might be more trusted because there is more consensus around a particular rating (a lower deviation).
(*In practice, some albums can have several thousand ratings)
This album is rated in the top 1% of all albums on BestEverAlbums.com. This album has a Bayesian average rating of 82.6/100, a mean average of 81.6/100, and a trimmed mean (excluding outliers) of 83.1/100. The standard deviation for this album is 16.0.

The only time I've ever seen a compilation album feel like a full LP, as the picks here seem like the perfect order to their specific talents. The density of rock is fantastic as most greatest hits albums are, so this is just icing on the cake.

Key Cuts: it's a compilation album

Basically a re-release of the, remasters, album from 1990, with an almost identical track list, repackaged with new cover artwork. You can't argue about the quality of songs though. I don't personally like to rate and comment on compilations, but I need to bump my points up to get to level seven.

Jackbrown is right, don't stone him.

if we all vote 0/100 maybe we can get all 3 of these LZ compilations out of the top 200 rated albums on this site. as of now it's embarrassing.

I haven't exactly heard the album Celebration Day, but I've heard every song on it. Still counts.

Your feedback for Mothership