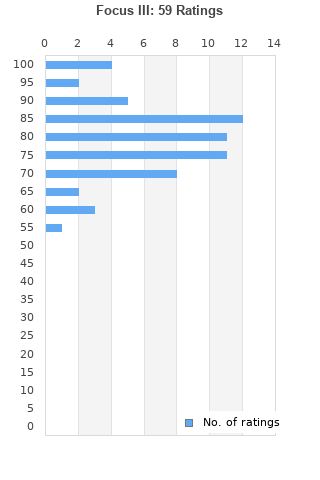 Focus III is ranked 3rd best out of 14 albums by Focus on BestEverAlbums.com.

The best album by Focus is Hamburger Concerto which is ranked number 3481 in the list of all-time albums with a total rank score of 403. 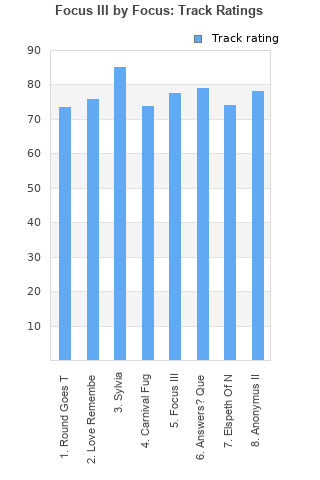 Outliers can be removed when calculating a mean average to dampen the effects of ratings outside the normal distribution. This figure is provided as the trimmed mean. A high standard deviation can be legitimate, but can sometimes indicate 'gaming' is occurring. Consider a simplified example* of an item receiving ratings of 100, 50, & 0. The mean average rating would be 50. However, ratings of 55, 50 & 45 could also result in the same average. The second average might be more trusted because there is more consensus around a particular rating (a lower deviation).
(*In practice, some albums can have several thousand ratings)
This album is rated in the top 3% of albums on BestEverAlbums.com. This album has a mean average rating of 79.0/100. The trimmed mean (excluding outliers) is 79.1/100. The standard deviation for this album is 9.7.

A great set of albums from a overlooked group. The guitar work alone makes this worth a listen.

This is a truly great double album full of superb musicianship and stimulating compositions and rates as Focus’ greatest work. There are huge range of influences at work on this album including classical, rock and jazz but the transitions between the styles are carried out with guile and style. Akkerman’s guitar work is brilliant as is Van Leer’s flute playing.

The eclectic nature of the album means that some parts will not appeal to all. The track Anonymous II coming in at 28 minutes smacks of pretentiousness but do not be put off as the variety of styles and contrasts in this track and the brilliance of the music make it a worthy of the listeners full attention The album produced one stand out single in the instrumental Sylvia

Your feedback for Focus III