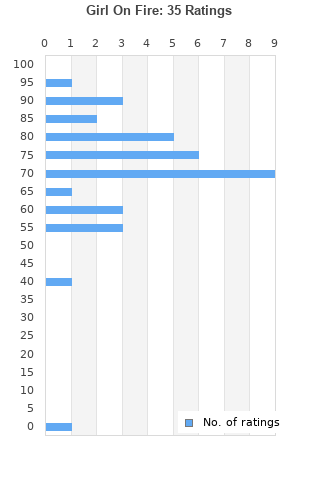 Girl On Fire is ranked 5th best out of 10 albums by Alicia Keys on BestEverAlbums.com.

The best album by Alicia Keys is Songs In A Minor which is ranked number 4354 in the list of all-time albums with a total rank score of 319. 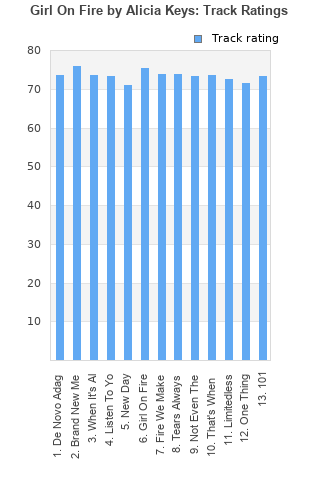 Rating metrics: Outliers can be removed when calculating a mean average to dampen the effects of ratings outside the normal distribution. This figure is provided as the trimmed mean. A high standard deviation can be legitimate, but can sometimes indicate 'gaming' is occurring. Consider a simplified example* of an item receiving ratings of 100, 50, & 0. The mean average rating would be 50. However, ratings of 55, 50 & 45 could also result in the same average. The second average might be more trusted because there is more consensus around a particular rating (a lower deviation).
(*In practice, some albums can have several thousand ratings)
This album has a Bayesian average rating of 73.1/100, a mean average of 70.8/100, and a trimmed mean (excluding outliers) of 73.1/100. The standard deviation for this album is 16.3.

The title track of this Alicia Keys release got the most attention as she collaborates with the then red hot Nicki Minaj. Also worth the listen is Keys' duet with Maxwell. Yet Keys proves she doesn't need fancy guest stars throughout the remainder of the album putting out more than 10 songs that could stand out on other albums.

Another superb Alicia Keys album. This time she stretches her musical pallete to include more atmospheric and ambient sounds. She seems to get with each record.

Your feedback for Girl On Fire