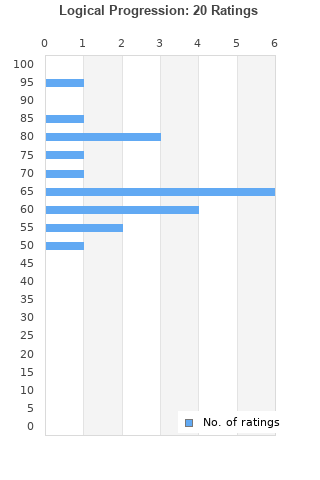 LTJ BUKEM & BLAME Live @ Turnmills Logical Progression MC Conrad DRS Cassette NM
Condition: Like New
Time left: 5d 17h 53m 56s
Ships to: Worldwide
£255.00
Go to store
Product prices and availability are accurate as of the date indicated and are subject to change. Any price and availability information displayed on the linked website at the time of purchase will apply to the purchase of this product.  See full search results on eBay

Logical Progression is ranked as the best album by LTJ Bukem.

Tickets from Ticketmaster Get tickets
May
29
Sat
15:00 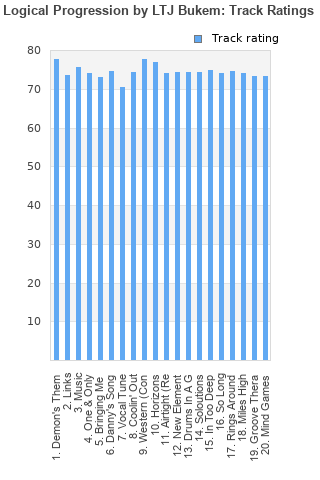 Rating metrics: Outliers can be removed when calculating a mean average to dampen the effects of ratings outside the normal distribution. This figure is provided as the trimmed mean. A high standard deviation can be legitimate, but can sometimes indicate 'gaming' is occurring. Consider a simplified example* of an item receiving ratings of 100, 50, & 0. The mean average rating would be 50. However, ratings of 55, 50 & 45 could also result in the same average. The second average might be more trusted because there is more consensus around a particular rating (a lower deviation).
(*In practice, some albums can have several thousand ratings)
This album has a Bayesian average rating of 70.9/100, a mean average of 69.3/100, and a trimmed mean (excluding outliers) of 69.3/100. The standard deviation for this album is 12.4.

Seminal cd from back when. Don't think I've ever heard it before, it's one of those you never quite got around to picking up. Picked up for pence in the charity shop because don't those 90s CDs sound just fine? Sounds exactly like what I thought it would (apart from I didn't realise cd one was unmixed) which means it's a winner.

This is apparently an important collection to drum-and-bass enthusiasts, which made my difficulties tracking it down surprising. Nothing about it turned me off, per se, but it was quite long and, while varied, still suffered from a lot of sameness.

Your feedback for Logical Progression