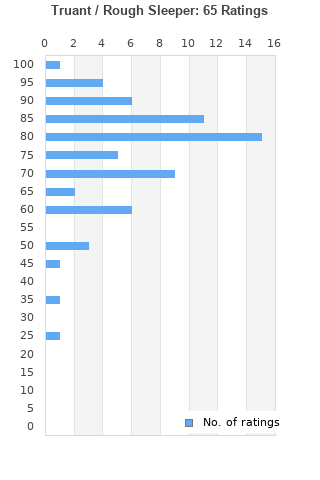 Truant / Rough Sleeper is ranked 7th best out of 10 albums by Burial on BestEverAlbums.com.

The best album by Burial is Untrue which is ranked number 331 in the list of all-time albums with a total rank score of 5,839.

Rise Against With The Used
Grand Sierra Resort and Casino, Reno, United States. 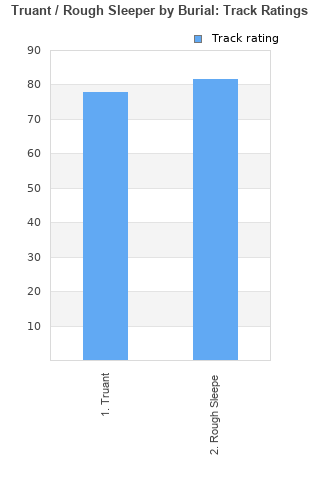 Rating metrics: Outliers can be removed when calculating a mean average to dampen the effects of ratings outside the normal distribution. This figure is provided as the trimmed mean. A high standard deviation can be legitimate, but can sometimes indicate 'gaming' is occurring. Consider a simplified example* of an item receiving ratings of 100, 50, & 0. The mean average rating would be 50. However, ratings of 55, 50 & 45 could also result in the same average. The second average might be more trusted because there is more consensus around a particular rating (a lower deviation).
(*In practice, some albums can have several thousand ratings)
This album is rated in the top 6% of all albums on BestEverAlbums.com. This album has a Bayesian average rating of 76.7/100, a mean average of 76.4/100, and a trimmed mean (excluding outliers) of 77.3/100. The standard deviation for this album is 13.6.

A great double single. "Truant" is cold and cyclical, whereas "Rough Sleeper" is its warmer counterpart complete with melodic percussion and more optimistic vocals. As a whole, it's yet another unmissable half an hour of music from Burial whose quality manages to compete with the excellent "Rival Dealer" and "Kindred" EPs.

Just so many beautiful, subtle shifts and alluringly addictive layers of music that disappear without you knowing it yet leave you yearning for it's return subconsciously, then consciously...
Along with Kindred, this EP includes his most expansive electronic work.

I was not disappointed.

Your feedback for Truant / Rough Sleeper