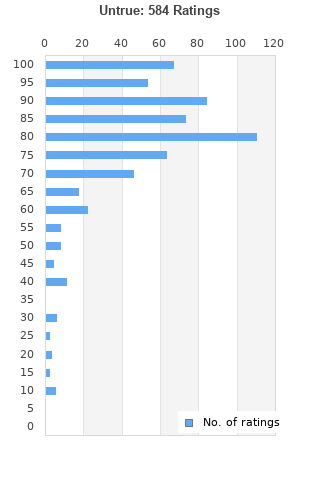 BURIAL (DUBSTEP) - UNTRUE USED - VERY GOOD CD
Condition: Very Good
Time left: 6d 16h 16m 52s
Ships to: Worldwide
$12.99
Go to store
Product prices and availability are accurate as of the date indicated and are subject to change. Any price and availability information displayed on the linked website at the time of purchase will apply to the purchase of this product.  See full search results on eBay

Untrue is ranked as the best album by Burial. 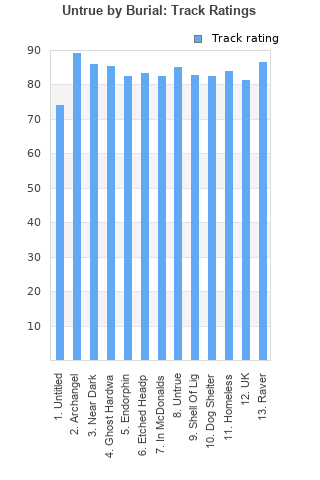 Rating metrics: Outliers can be removed when calculating a mean average to dampen the effects of ratings outside the normal distribution. This figure is provided as the trimmed mean. A high standard deviation can be legitimate, but can sometimes indicate 'gaming' is occurring. Consider a simplified example* of an item receiving ratings of 100, 50, & 0. The mean average rating would be 50. However, ratings of 55, 50 & 45 could also result in the same average. The second average might be more trusted because there is more consensus around a particular rating (a lower deviation).
(*In practice, some albums can have several thousand ratings)
This album is rated in the top 1% of all albums on BestEverAlbums.com. This album has a Bayesian average rating of 81.4/100, a mean average of 80.0/100, and a trimmed mean (excluding outliers) of 81.6/100. The standard deviation for this album is 16.9.

This album is great at making you feel isolated and lonely and really creates an atmosphere unlike any other record. The artist really allows the music to do the talking and relies on it to take you to this other place as it completely encapsulates you and draws you into these dark feelings. It is incredible how they do it and that is the strength of this album. There are many amazing tracks as well that truly demonstrate this dark feel such as Archangel, Untrue and Homeless being my favourites. It is also so multi-layered so there is new stuff to find with every listen. However, the album can feel a little slow at times and lacking substance in places. This does mean that some songs do drag and it does draw you from the record a little. On the whole, if you enjoy dark ambient music with sharp and unique hip hop beats then you have to listen to this record.

Dark, atmospheric genius. Still feels so mysterious after countless listens, with more and more layers being uncovered upon returns to the project. Especially recommend listening to at the early hours of the morning.

There is something really deep about this album, It is melacholic, atmospheric, kind of take you to another world. Something like a futuristic city.

Perfectly encapsulates the feeling of walking the city streets at night hearing the party happen right across from you in some underground nightclub... the beauty of loneliness

Good ass electronic music. “Dubstep”? As long as Public Enemy and Outkast are both “hip hop”, this is just “electronic music”. You can more easily praise an album that introduced a new style within a genre (can’t even call this a subgenre really, just a mix of trip hop and ambient) if that style is categorized as if it’s a genre. “Outkast and Dr. Dre really changed hip hop” sounds a lot less of a big deal than “Burial really defined the sound of dubstep”. The labels we give to music as “genres” often just serve the biases of the majority. Not that there is a problem with categorizing music, but you have to do it well.

I love the sample from "Lost Carol" on "Endorphin".

After having explored some of his later EP work (which I enjoyed a lot), it has gotten a little better. It still feels bland in a lot of places, but I ave found a couple tracks that are fairly enjoyable. But it still feels like nearly the exact same beat is used for essentially every song on the album, and the tracks still dont feel like they progress much throughout their run time, unlike his later long form releases. I am enjoying the ambient tracks more right now. However it is growing on me, and we will see if that trend continues

I would say that I generally appreciate electronic music, but after repeat listens I don't quote understand the hype behind this album. I haven't really found anything that grabs my attention. I have found that it is great music to not pay attention to. Now, I know I'm missing out on something, and will listen a few more times. This has just been my experience so far

Also I'm very confused why people are calling it dubstep. I'm not very familiar with the genre at all but it has a lot more "wub-wub" and, like, bad bass drops, at least in my mind. This sounds more like regular idm, just with vocal samples.

Your feedback for Untrue