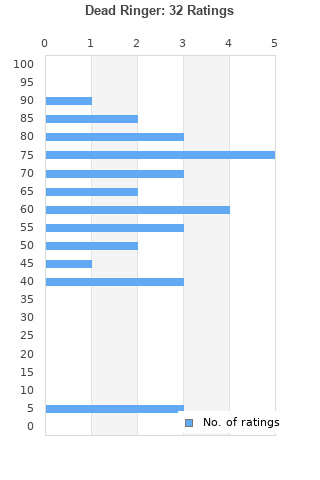 Dead Ringer is ranked 3rd best out of 18 albums by Meat Loaf on BestEverAlbums.com.

The best album by Meat Loaf is Bat Out Of Hell which is ranked number 573 in the list of all-time albums with a total rank score of 3,253. 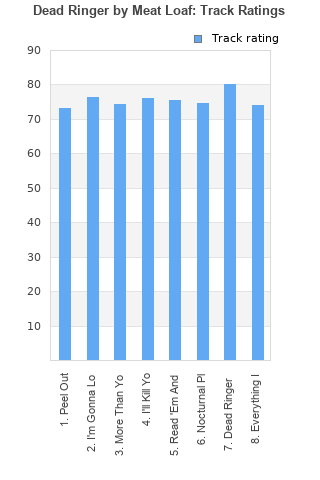 Rating metrics: Outliers can be removed when calculating a mean average to dampen the effects of ratings outside the normal distribution. This figure is provided as the trimmed mean. A high standard deviation can be legitimate, but can sometimes indicate 'gaming' is occurring. Consider a simplified example* of an item receiving ratings of 100, 50, & 0. The mean average rating would be 50. However, ratings of 55, 50 & 45 could also result in the same average. The second average might be more trusted because there is more consensus around a particular rating (a lower deviation).
(*In practice, some albums can have several thousand ratings)
This album has a Bayesian average rating of 68.1/100, a mean average of 63.3/100, and a trimmed mean (excluding outliers) of 65.9/100. The standard deviation for this album is 19.2.

Well it's not great. Whereas "Bat Out Of Hell" was rock opera, this is more opera than rock. Almost all the songs are lyrically negative and depressing, and the music reflects that. One sad ballad would be OK, but half the album feels like a depressing dirge rather than a rock album. The rockin' single "Dead Ringer For Love" is the best song here, and it's alright, but it doesn't even fit with the rest of the album. "Nocturnal Pleasures" is a goofy but funny leftover that seems more appropriate for Steinman's own Peter Pan themed album released this same year. Even the thoroughly mediocre "Blind Before I Stop" album is better than this one.

This album is exhausting.

What could've been the second Bat Out of Hell. If it's not that, it's a good spin-off.

Your feedback for Dead Ringer