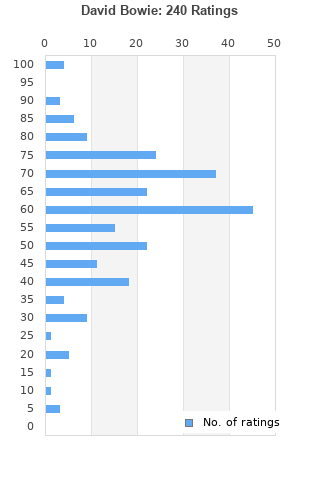 DAVID BOWIE ALADDIN SANE RARE OOP MINI-LP SHM CD
Condition: Brand New
Time left: 3m 3s
Ships to: Worldwide
$74.99
Go to store
Product prices and availability are accurate as of the date indicated and are subject to change. Any price and availability information displayed on the linked website at the time of purchase will apply to the purchase of this product.  See full search results on eBay

David Bowie is ranked 26th best out of 81 albums by David Bowie on BestEverAlbums.com.

The best album by David Bowie is The Rise And Fall Of Ziggy Stardust And The Spiders From Mars which is ranked number 9 in the list of all-time albums with a total rank score of 63,745. 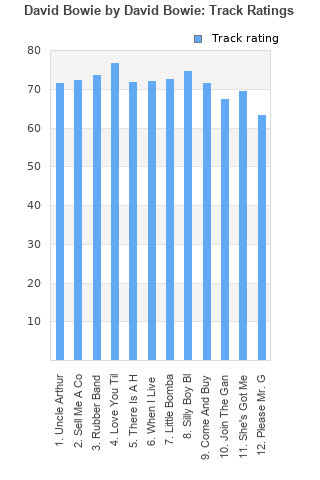 Rating metrics: Outliers can be removed when calculating a mean average to dampen the effects of ratings outside the normal distribution. This figure is provided as the trimmed mean. A high standard deviation can be legitimate, but can sometimes indicate 'gaming' is occurring. Consider a simplified example* of an item receiving ratings of 100, 50, & 0. The mean average rating would be 50. However, ratings of 55, 50 & 45 could also result in the same average. The second average might be more trusted because there is more consensus around a particular rating (a lower deviation).
(*In practice, some albums can have several thousand ratings)
This album has a Bayesian average rating of 60.3/100, a mean average of 58.9/100, and a trimmed mean (excluding outliers) of 59.7/100. The standard deviation for this album is 18.0.

Forgettable debut for Bowie, and not a sign of things to come.

Some flashes of talent but not a very good album. Bowie's theatrics are the only saving grace of the album, I think. It doesn't sound like he wasn't trying or anything like that it's just a bad debut for whatever reason. The production is actually pretty good but the songs aren't.

A music hall album with some folk pop tracks. A style is too british for american audiences.
Itself the album is too inconsistent..

The real David Bowie only sort of comes through in certain parts. Not good at all.

Due to the style of the songs, this album is never going to be rated a classic. Way too whimsical by half ! Very much of its time. However, having first heard it when I was 10, I have a lot of affection for it. The childlike quality of the songs appealed to me..and still does in a nostalgic way. Can’t say I’d recommend it to others, but I like it.

It starts of enjoyably enough but after a few tracks the novelty already starts to wear off. By the time you get to the end of the album you feel entirely drained. If it wasn't Bowie this would be a long forgotten slice of sixties whimsical psychedelia. For completists only.

Strange record, it's like he wasn't sure what to do. Rather silly and very, very English.

This is definitely an album of its time.No one could have guessed from this album what Bowie would go on to achieve.Still worth a listen .

Your feedback for David Bowie