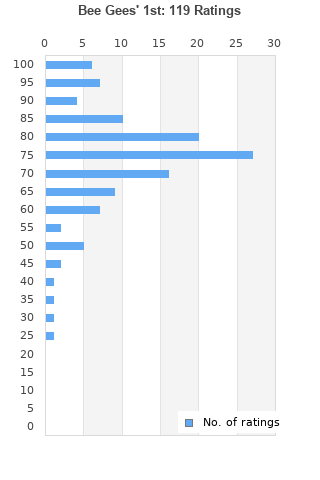 1st is ranked 3rd best out of 33 albums by Bee Gees on BestEverAlbums.com.

The best album by Bee Gees is Odessa which is ranked number 2747 in the list of all-time albums with a total rank score of 551. 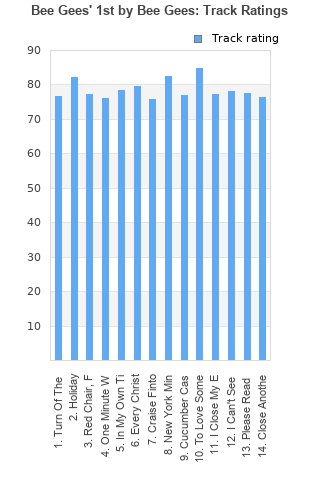 2
6.
Every Christian Lion-hearted Man Will Show You
Rating: 76 (15 votes)Comments:

Rating metrics: Outliers can be removed when calculating a mean average to dampen the effects of ratings outside the normal distribution. This figure is provided as the trimmed mean. A high standard deviation can be legitimate, but can sometimes indicate 'gaming' is occurring. Consider a simplified example* of an item receiving ratings of 100, 50, & 0. The mean average rating would be 50. However, ratings of 55, 50 & 45 could also result in the same average. The second average might be more trusted because there is more consensus around a particular rating (a lower deviation).
(*In practice, some albums can have several thousand ratings)
This album has a Bayesian average rating of 73.5/100, a mean average of 73.5/100, and a trimmed mean (excluding outliers) of 73.5/100. The standard deviation for this album is 14.7.

It seems many of those visiting this site were first introduced to the Bee Gees from their disco days. This album charted in the Top Ten in both the U.K. and the U.S. in 1967. A few of us are still around that remember the group as they burst on to the scene during the Summer of Love. The group is not in the tainted RRHOF for "Stayin' Alive" By the time the band scored their first #1 single "Massachusetts", released on their next LP "Horizontal", the lads had been at it for 10 years.

Before the high pitched squeals, the Bee Gees had some great, pretty songs.

Holiday is a great song.

I´g giving this such a high rating mainly because of the song Holiday, which is one of my absolute favourites.

I think the reason the Bee Gees are overlooked as a really great band because of their later disco work, but I would rate this album with other psychedelic greats like the Zombies' Odessey & Oracle. And work like 1st combined with their disco chart busters like Stayin' Alive and How Deep is Your Love show how truly talented they really were as a band.

A pop masterpiece! Proof that the Bee Gees could do something other than disco. Every song is great, and this is definitely one of the best 60s pop albums I've heard.

This is a very, very good album! The Bee Gees were thought of as a disco band, but their first album is psychedelic pop, and really is a fine album! Not to be missed!

Your feedback for 1st