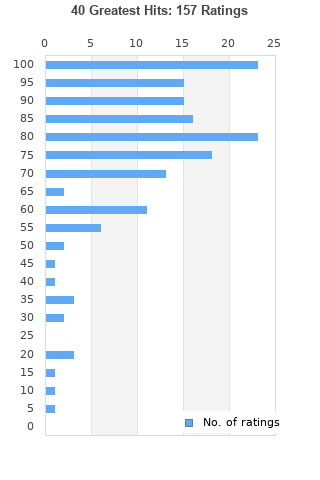 Hank Williams - 40 Greatest Hits (2-CD Set) • Best of- GREAT CONDITION
Condition: Like New
Time left: 9h 36m 11s
Ships to: Worldwide
$9.49
Go to store
Product prices and availability are accurate as of the date indicated and are subject to change. Any price and availability information displayed on the linked website at the time of purchase will apply to the purchase of this product.  See full search results on eBay

40 Greatest Hits is ranked as the best album by Hank Williams. 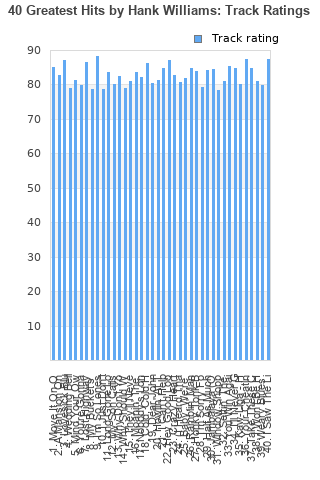 Rating metrics: Outliers can be removed when calculating a mean average to dampen the effects of ratings outside the normal distribution. This figure is provided as the trimmed mean. A high standard deviation can be legitimate, but can sometimes indicate 'gaming' is occurring. Consider a simplified example* of an item receiving ratings of 100, 50, & 0. The mean average rating would be 50. However, ratings of 55, 50 & 45 could also result in the same average. The second average might be more trusted because there is more consensus around a particular rating (a lower deviation).
(*In practice, some albums can have several thousand ratings)
This album is rated in the top 3% of all albums on BestEverAlbums.com. This album has a Bayesian average rating of 77.9/100, a mean average of 76.9/100, and a trimmed mean (excluding outliers) of 78.2/100. The standard deviation for this album is 20.5.

Hard to ignore how many iconic songs he wrote.

This is missing a lot of fantastic early stuff. His early stuff (as found on disc one of "The Complete Hank Williams") is ESSENTIAL listening. Really laid down the foundation for American country music there, and he wrote very emotional songs of redemption on the plains. He wasn't just a sad, lonely dude!

Bucket had a hole in it before I listened to this album. Hank is the godfather of country music. Without him, none of the modern greats would exist. It's super twangy and full of lost love, but it reminds me of a much simpler time.

The first time my dad put in the double CD I thought he was nuts....but he opened my world to Hank. Each song became a classic and I finally got what my dad got about hank - and what my mom could not understand.

The country's giant. In the tower of song (Cohen dixit), Hank Williams composed every night a piece of truth, love, betrayal, despair,life.

My Bucket's Got a Hole in It

Your feedback for 40 Greatest Hits