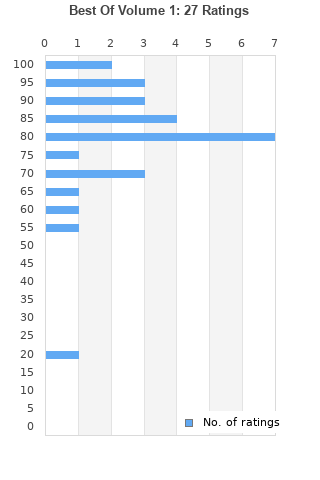 Van Halen - The Best of Both Worlds Definitive 2-CD Collection 36 Tracks, New.
Condition: Brand New
Time left: 5h 7m 35s
Ships to: Worldwide
$12.99
Go to store
Product prices and availability are accurate as of the date indicated and are subject to change. Any price and availability information displayed on the linked website at the time of purchase will apply to the purchase of this product.  See full search results on eBay

Best Of Van Halen, Volume 1 is ranked 13th best out of 16 albums by Van Halen on BestEverAlbums.com.

The best album by Van Halen is Van Halen which is ranked number 358 in the list of all-time albums with a total rank score of 5,527.

Listen to Best Of Van Halen, Volume 1 on YouTube 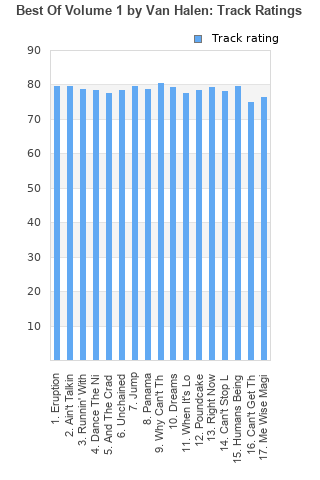 Rating metrics: Outliers can be removed when calculating a mean average to dampen the effects of ratings outside the normal distribution. This figure is provided as the trimmed mean. A high standard deviation can be legitimate, but can sometimes indicate 'gaming' is occurring. Consider a simplified example* of an item receiving ratings of 100, 50, & 0. The mean average rating would be 50. However, ratings of 55, 50 & 45 could also result in the same average. The second average might be more trusted because there is more consensus around a particular rating (a lower deviation).
(*In practice, some albums can have several thousand ratings)
This album is rated in the top 2% of all albums on BestEverAlbums.com. This album has a Bayesian average rating of 79.5/100, a mean average of 79.6/100, and a trimmed mean (excluding outliers) of 82.1/100. The standard deviation for this album is 16.7.

This greatest hits collection of Van Halen released back in 1996 is still a fucking masterpiece and easily one of my favourite “best of” collections. Hit after hit from both the Roth and Hagar eras PLUS new brand spanking new tracks recorded with Roth in 1996, “Can’t Get This Stuff No More” and “Me Wise Magic”. These are two of my all-time favourite Roth led VH songs. I also love they included “Humans Being” from the Twister soundtrack as that song rocks! With all of that being said, there were plenty of hit songs that didn’t make the cut like “Hot For Teacher”, “Pretty Woman”, ‘You Really Got Me”, “I’ll Wait”, “Runaround”... This album is worth a spin a couple times a year minimum,

Your feedback for Best Of Van Halen, Volume 1