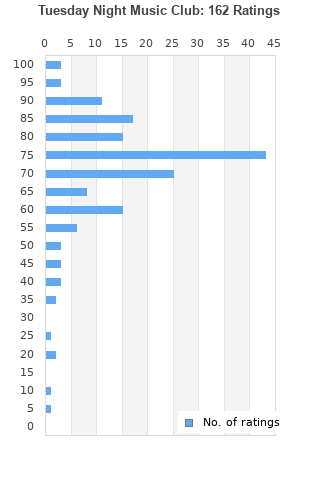 SHERYL CROW CD TUESDAY NIGHT MUSIC CLUB
Condition: Very Good
Time left: 33m 48s
Ships to: Worldwide
$7.99
Go to store
Product prices and availability are accurate as of the date indicated and are subject to change. Any price and availability information displayed on the linked website at the time of purchase will apply to the purchase of this product.  See full search results on eBay

Tuesday Night Music Club is ranked 2nd best out of 13 albums by Sheryl Crow on BestEverAlbums.com.

The best album by Sheryl Crow is Sheryl Crow which is ranked number 2497 in the list of all-time albums with a total rank score of 632. 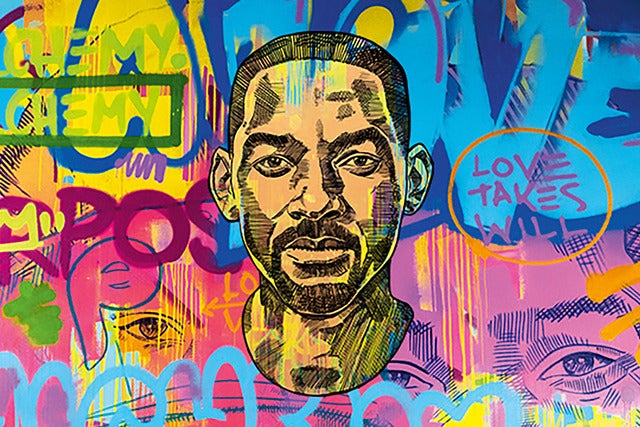 Will Smith: An Evening Of Stories With Friends
The Chicago Theatre, Chicago, United States. 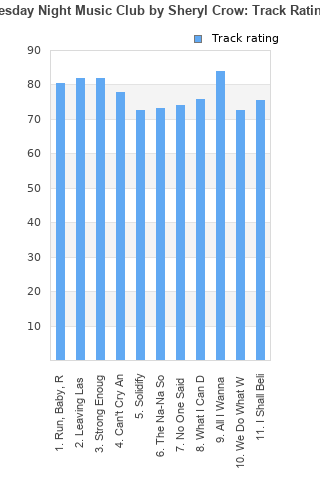 Rating metrics: Outliers can be removed when calculating a mean average to dampen the effects of ratings outside the normal distribution. This figure is provided as the trimmed mean. A high standard deviation can be legitimate, but can sometimes indicate 'gaming' is occurring. Consider a simplified example* of an item receiving ratings of 100, 50, & 0. The mean average rating would be 50. However, ratings of 55, 50 & 45 could also result in the same average. The second average might be more trusted because there is more consensus around a particular rating (a lower deviation).
(*In practice, some albums can have several thousand ratings)
This album has a Bayesian average rating of 72.6/100, a mean average of 71.8/100, and a trimmed mean (excluding outliers) of 72.6/100. The standard deviation for this album is 14.4.

With a confident vocal range, staccato rhythms and melodic guitars, singer-songwriter Sheryl Crow immediately captures the listener into her world of infectious, alternative country-rock. The songs on her debut are more about the lyrics than the melodies, but that's not to say she doesn't write fine choruses. You come to this album for the stories it tells you, rather than the mood-lifting melodies, even though songs like Leaving Las Vegas and Can't Cry Anymore are hard to shake off.

Unlike most of her peers at the time, Sheryl Crow doesn't rely on infectious melodies or simple chord progressions for her hits. Instead, she convinces with a raspy and deep voice and very straightforward, rhythmic and almost metallic music. It's unique in its own right, even if it doesn't' work all the way, as songs like Solidify and The Na-Na Song prove. These tracks represent the more alternative side of the album, combining elements from hip-hop and early 90s alternative rock. In that sense, this album is very much a product of its era.

My only problem with the album is that there is little variation between the more uptempo songs and the slower ones (such as No One Said It Would Be Easy and the sleepy soul-tinged We Do What We Can) which means that the album has a plain flow to it and feels longer than it needs to. The album loses steam during the last couple of tracks and after the fine All I Wanna Do, ending on a pretty disappointing note.

It's good. For a debut album, very good.

Close to great. A few too many insignificant tracks but the hits are both good and numerous.

A solid debut, but I prefer her next one.

This is an all-time favorite. So many great songs. Her later albums were more mature in a lot of ways but this one feels the most honest.

You'd never know it by hit "All I Wanna Do" that she struggled for a while to start her career off in her own way, not how a record company would want to present her. Regardless, the pop/rock on display here is pretty masterful for a debut album. Filtered through her version of Stevie Nicks, a lot of these tracks are catchy hits, and both "run, baby, run" and "i shall believe" would both work well as concert closers.

She did a good job here...the next album is the one to have. On a lot of her later stuff, she mails it in...not the case here.

Yeah, 'All I Wanna Do' is prety mindless but it's catchy fun. The album otherwise is very very good and an underrated solo female classic.