This Nation's Saving Grace (studio album) by The Fall 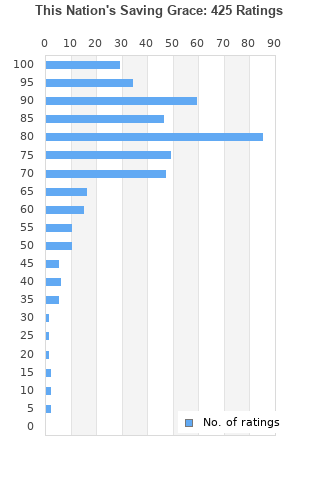 This Nation's Saving Grace is ranked as the best album by The Fall.

Margo Price ' Til The Wheels Fall Off Tour with Kam Franklin (of The Suffers)
Chelsea’s Live, Baton Rouge, United States. 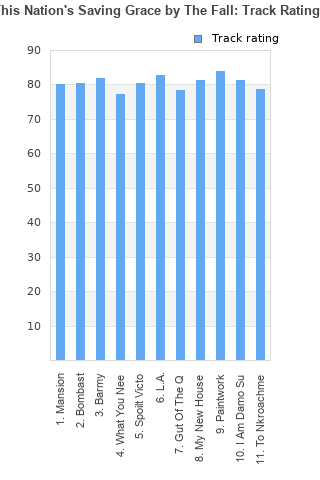 Rating metrics: Outliers can be removed when calculating a mean average to dampen the effects of ratings outside the normal distribution. This figure is provided as the trimmed mean. A high standard deviation can be legitimate, but can sometimes indicate 'gaming' is occurring. Consider a simplified example* of an item receiving ratings of 100, 50, & 0. The mean average rating would be 50. However, ratings of 55, 50 & 45 could also result in the same average. The second average might be more trusted because there is more consensus around a particular rating (a lower deviation).
(*In practice, some albums can have several thousand ratings)
This album is rated in the top 2% of all albums on BestEverAlbums.com. This album has a Bayesian average rating of 78.8/100, a mean average of 77.7/100, and a trimmed mean (excluding outliers) of 79.0/100. The standard deviation for this album is 16.7.

A very repetitive listen that does get uninteresting by the time you get to the end but there is still many things to love on here. One of those things is the sound as this is amongst the most consistent albums in the 80's in terms of atmosphere. The whole thing is dark, gloomy and feels slightly dystopian. It does a great job of really dragging you into the environment which is primarily done through the use of the heavier instrumentation. Add on top of this a monotone and deep vocal it makes for a unique experience. The music itself isn't fantastic however with there being quite a lot of filler tracks on here which aren't really of any significance to the record at all. I do feel like there could be a lot more done on the record as well with it feeling a bit light and empty in places. It is need of a spark that just isn't present on here. Overall, atmospherically this album is great but the actual musical quality is quite poor and boring.

Right now this is my favorite Fall record. I just pulled the cassette when I logged in to see this is the album of the day. Coincidentally this is a good starting point if your a new listener.

couldn't agree more with the comment which says this has been singled out as the great fall album by some critics for no obvious reason. this is a good fall album but it's nowhere near their best of the '80s.

The most highly regarded album by the Fall on this particular site, and this album does still have much to shout about, it is better for example than the further trio of Brix albums that followed it. However, in my opinion it cannot compete with the likes of Grotesque, Hex or Perverted By Language, the songs aren't quite as good.

As an album it is quite consistent but it doesn't have that one truly exceptional Fall track on it, it has about five tracks that are very good which is almost enough really.

This has to be the most underrated album of all time. Every song is dynamite. 548th best album is absolutely criminal.

It's not an easy thing to listen to, but it has a lasting resonance that I can't quite describe. This is a properly fleshed out Post-Punk work, and it shows with wonderful moodniess. If you can give it the time to appreciate it, it quickly becomes an excellent album.

According to the postman, it's like the bleeding bank of England!

Your feedback for This Nation's Saving Grace