Live At The Gaslight 1962 (live album) by Bob Dylan 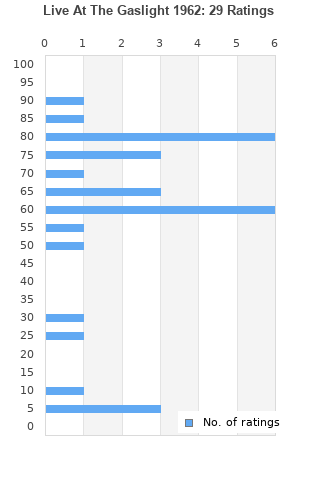 Live At The Gaslight 1962 is ranked 70th best out of 74 albums by Bob Dylan on BestEverAlbums.com.

The best album by Bob Dylan is Highway 61 Revisited which is ranked number 26 in the list of all-time albums with a total rank score of 35,906. 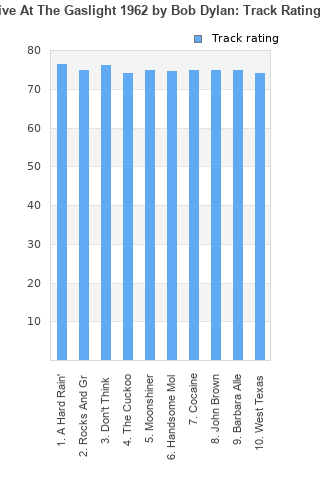 Live At The Gaslight 1962 rankings

Live At The Gaslight 1962 collection

Live At The Gaslight 1962 ratings

Rating metrics: Outliers can be removed when calculating a mean average to dampen the effects of ratings outside the normal distribution. This figure is provided as the trimmed mean. A high standard deviation can be legitimate, but can sometimes indicate 'gaming' is occurring. Consider a simplified example* of an item receiving ratings of 100, 50, & 0. The mean average rating would be 50. However, ratings of 55, 50 & 45 could also result in the same average. The second average might be more trusted because there is more consensus around a particular rating (a lower deviation).
(*In practice, some albums can have several thousand ratings)
This album has a Bayesian average rating of 62.1/100, a mean average of 58.2/100, and a trimmed mean (excluding outliers) of 58.2/100. The standard deviation for this album is 25.7.

Live At The Gaslight 1962 favourites

Live At The Gaslight 1962 comments


This is a collection of early live recordings from late 1962. It's a very nice, surprisingly good sounding document from that time just after the release of his debut album and before his sophomore album, "Freewheelin' Bob Dylan".
The songs "A Hard Rains A-Gonna Fall" and "Don't Think Twice, It's Alright" and "John Brown" all sound fresh and exciting here. "John Brown" is down right heartbreaking! It is truly one of the greatest and poignant anti-war songs ever written. And the crowd participation at the end of "A Hard Rain..." is fabulous as well.

The folk songs he covers are also very nice. "Moonshiner" and "Barbara Allen" are stand outs. As is "Rocks and Gravel" which is a cool, dark blues number originally slated to be included on "Freewheelin'...".

All in all, this is a recommended album to listen to, if for no other reason than for the curiosity of hearing Dylan perform in such an early and interesting stage in his illustrious career. This record really does show Dylan was never "just another ordinary folkie". No, he was pretty fantastic from the word go.

Your feedback for Live At The Gaslight 1962