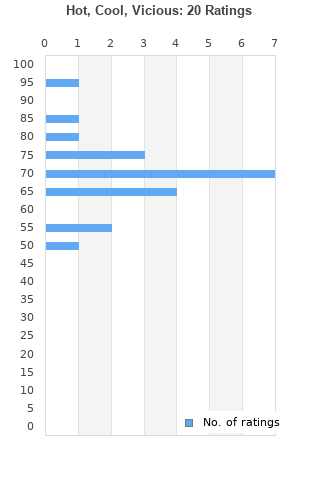 Salt 'N Pepa Hot Cool & Vicious CD FREE SHIPPING
Condition: Very Good
Time left: 2d 1h 40m 4s
Ships to: Worldwide
$9.00
Go to store
Product prices and availability are accurate as of the date indicated and are subject to change. Any price and availability information displayed on the linked website at the time of purchase will apply to the purchase of this product.  See full search results on eBay

Hot, Cool, Vicious is ranked as the best album by Salt-N-Pepa.

No tracks have been rated on this album yet.
#
Track
Rating/Comments
1.
Beauty And The Beat
Rating: Not enough dataComments:

0
4.
It's Alright
Rating: Not enough dataComments:

0
5.
Chick On The Side (Remix)
Rating: Not enough dataComments:

0
6.
I Desire
Rating: Not enough dataComments:

0
7.
The Showstopper
Rating: Not enough dataComments:

Rating metrics: Outliers can be removed when calculating a mean average to dampen the effects of ratings outside the normal distribution. This figure is provided as the trimmed mean. A high standard deviation can be legitimate, but can sometimes indicate 'gaming' is occurring. Consider a simplified example* of an item receiving ratings of 100, 50, & 0. The mean average rating would be 50. However, ratings of 55, 50 & 45 could also result in the same average. The second average might be more trusted because there is more consensus around a particular rating (a lower deviation).
(*In practice, some albums can have several thousand ratings)
This album has a mean average rating of 72.0/100. The trimmed mean (excluding outliers) is 71.7/100. The standard deviation for this album is 12.3.

A bit RUN-DMC-ish, but their flow is great nonetheless. And the fact that they’re women automatically puts an interesting spin to it, vocal-wise and theme-wise.

I don't believe push it is on the original 86 issue but on later issues as was a hit. Album is decent, better than I'd thought. That's mostly as the production is good for 86 and fairly sample based. Was quite surprised to hear what is almost certainly the first ever use of the "Amen Break", well over a year before straight outta Compton. It's no coincidence that the first in the ultimate breaks and beats lp's was released in 86 which included Amen Brother, still respect to hurby for some advanced production for 86.

One of the first female mainstream rap groups. They get props for that. Unfortunately, most of the tracks on this album are pretty weak.

Your feedback for Hot, Cool, Vicious