It's A Long Way Down (studio album) by The Fallen Angels 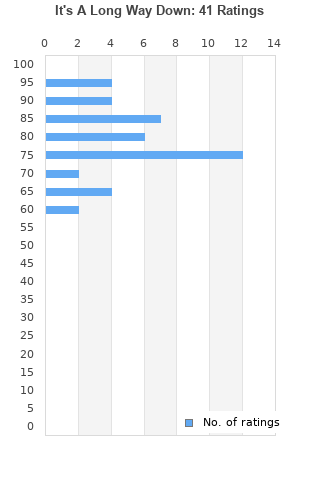 The FALLEN ANGELS-IT’S A LONG WAY DOWN-Roulette GERMANY -PSYCH HOLY GRAIL-SCARCE
Condition: Used
Time left: 20d 17h 4m 4s
Ships to: Worldwide
$999.00
Go to store
Product prices and availability are accurate as of the date indicated and are subject to change. Any price and availability information displayed on the linked website at the time of purchase will apply to the purchase of this product.  See full search results on eBay

It's A Long Way Down is ranked as the best album by The Fallen Angels.

Listen to It's A Long Way Down on YouTube 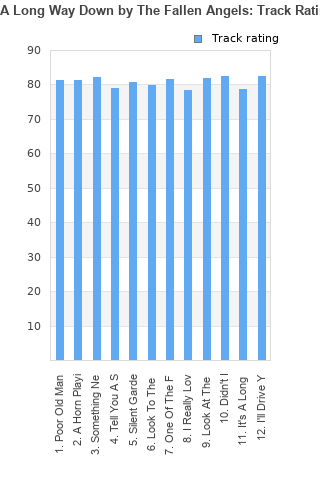 It's A Long Way Down rankings

It's A Long Way Down collection

It's A Long Way Down ratings

Rating metrics: Outliers can be removed when calculating a mean average to dampen the effects of ratings outside the normal distribution. This figure is provided as the trimmed mean. A high standard deviation can be legitimate, but can sometimes indicate 'gaming' is occurring. Consider a simplified example* of an item receiving ratings of 100, 50, & 0. The mean average rating would be 50. However, ratings of 55, 50 & 45 could also result in the same average. The second average might be more trusted because there is more consensus around a particular rating (a lower deviation).
(*In practice, some albums can have several thousand ratings)
This album is rated in the top 3% of all albums on BestEverAlbums.com. This album has a Bayesian average rating of 78.2/100, a mean average of 79.6/100, and a trimmed mean (excluding outliers) of 79.6/100. The standard deviation for this album is 9.7.

It's A Long Way Down favourites

It's A Long Way Down comments

If you love the Left Banke and wished there was more, here is the next best thing.

This is a great album. Doubt I would have heard this one without BEA. Great melodies, interesting lyrics. Album has a solid vibe to it and bears repeated listening. A lost gem for certain.

Definitely a psychedelic rock masterpiece. I wonder why this album has been forgotten... Great melodies, fine acoustic arrangements and captivating vocals.

Great lost psychedelic. Beautiful arrangements with string overdubs a la "Forever Changes" and strongly influenced by it. You can clearly hear these influences in "A Horn Playing On My Thin Wall", "Look At The Wind", "Look To The Sun" and "Didn't" among others. In other respects it draws from jazz as in "Look At The Wind" even from "The Velvet Underground And Nico" and "The Doors" as in "Something New You Can Hide In".

Add this to the ones that you have to listen before you die.

Your feedback for It's A Long Way Down