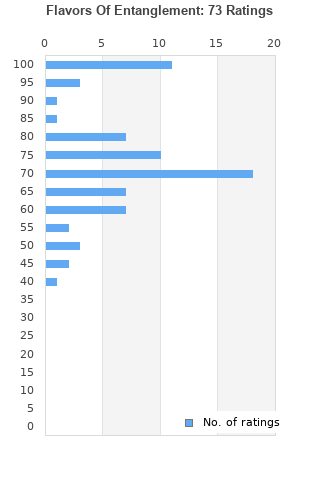 Alanis Morissette - Flavors of Entanglement DELUXE EDITION 2-CD with slipcase
Condition: Very Good
Time left: 1d 8h 8m 35s
Ships to: Worldwide
$5.75
Go to store
Product prices and availability are accurate as of the date indicated and are subject to change. Any price and availability information displayed on the linked website at the time of purchase will apply to the purchase of this product.  See full search results on eBay

Flavors Of Entanglement is ranked 3rd best out of 16 albums by Alanis Morissette on BestEverAlbums.com.

The best album by Alanis Morissette is Jagged Little Pill which is ranked number 359 in the list of all-time albums with a total rank score of 5,487. 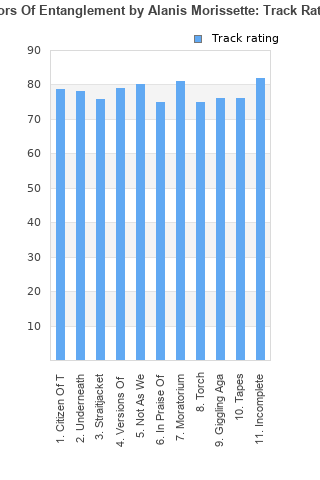 Rating metrics: Outliers can be removed when calculating a mean average to dampen the effects of ratings outside the normal distribution. This figure is provided as the trimmed mean. A high standard deviation can be legitimate, but can sometimes indicate 'gaming' is occurring. Consider a simplified example* of an item receiving ratings of 100, 50, & 0. The mean average rating would be 50. However, ratings of 55, 50 & 45 could also result in the same average. The second average might be more trusted because there is more consensus around a particular rating (a lower deviation).
(*In practice, some albums can have several thousand ratings)
This album is rated in the top 19% of all albums on BestEverAlbums.com. This album has a Bayesian average rating of 74.8/100, a mean average of 75.0/100, and a trimmed mean (excluding outliers) of 75.0/100. The standard deviation for this album is 15.0.

My best album of Alanis

This is the album that introduced me to Alanis properly. I knew her hits before but they were unlike most of what I discovered on this album, and is a surprise to everyone else I have shown as well. This album is the perfect balance between the electronic and the organic in production, and wonderful fusion that suits Alanis' unique voice.
My friend recommended the album to me and it's still my favourite Alanis album. My friend is a Frou Frou fan and stumbled upon Flavors of Entanglement after finding out it album had the same producer. I wasn't sure what to expect because I wasn't as in to Frou Frou as my friend, but it's fantastic.
The album is so diverse in genre - if you like electronica, rock, pop, dance, or even stripped down piano ballads - there is something here you will appreciate. When Citizen of the Planet hits the chorus it even borders on heavy metal. Even if you don't like Alanis it's still worth checking this album out.

Your feedback for Flavors Of Entanglement