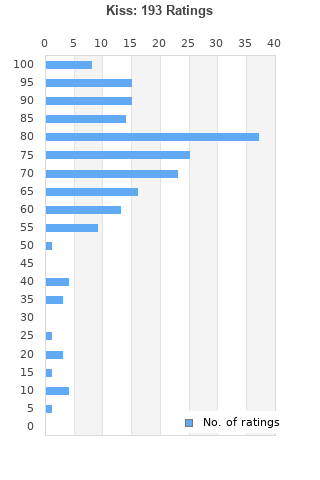 KISS THE ORIGINALS Japan 3 LP Set w/ Rock Card & Sticker VIP-5501/3
Condition: Used
Time left: 1m 22s
Ships to: Worldwide
$71.00
Go to store
Product prices and availability are accurate as of the date indicated and are subject to change. Any price and availability information displayed on the linked website at the time of purchase will apply to the purchase of this product.  See full search results on eBay

Kiss is ranked 3rd best out of 33 albums by Kiss on BestEverAlbums.com.

The best album by Kiss is Destroyer which is ranked number 1357 in the list of all-time albums with a total rank score of 1,327. 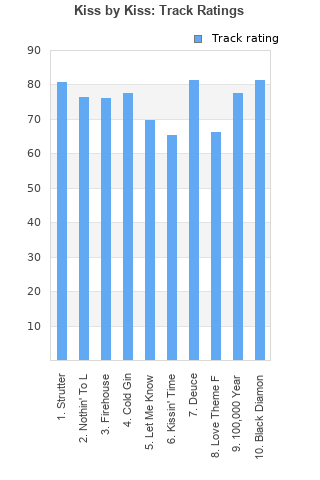 Rating metrics: Outliers can be removed when calculating a mean average to dampen the effects of ratings outside the normal distribution. This figure is provided as the trimmed mean. A high standard deviation can be legitimate, but can sometimes indicate 'gaming' is occurring. Consider a simplified example* of an item receiving ratings of 100, 50, & 0. The mean average rating would be 50. However, ratings of 55, 50 & 45 could also result in the same average. The second average might be more trusted because there is more consensus around a particular rating (a lower deviation).
(*In practice, some albums can have several thousand ratings)
This album has a Bayesian average rating of 69.7/100, a mean average of 69.5/100, and a trimmed mean (excluding outliers) of 69.5/100. The standard deviation for this album is 23.4.

Great debut. Top heavy with classic tracks. Dips a bit in the middle but epic finish with '100,000 Years' & 'Black Diamond'

Great debut with nearly the whole album appearing later on Alive the band knew exactly how they wanted to sound.

Second only to Destroyer. Killer Debut!

Solid debut. Several of the album's songs became concert staples. I never found that this early sound really suited the band's image at this time. Some of the songs are hard rocking, but songs like Strutter have a very simple, mainstream pop rock sort of sound.

Solid debut by Kiss, good from start to finish.

I love how the second and fourth guy look bored as fuck.

I'm far from being a fan of KISS, especially with all the things Gene Simmons is saying these days, but this is a very strong amid straightforward rock record.

Hard to believe how different this record sounded compared to what was going on in 1974. KISS rarely gets the credit they deserve for pioneering this straight forward no frills rock with a heavy British influence. These songs are so strong that all these years later you will still hear them on their current tours. The production was even really good for this...maintaining a good bit while also being crystal clear. One of the best rock debuts ever even if it took the record buying public a few years to catch onto it.

Strutter & Black Diamond are the best tracks here on their debut.

Your feedback for Kiss