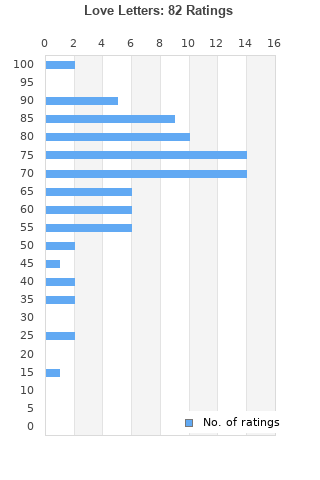 Love Letters is ranked 2nd best out of 7 albums by Metronomy on BestEverAlbums.com.

The best album by Metronomy is The English Riviera which is ranked number 1428 in the list of all-time albums with a total rank score of 1,231. 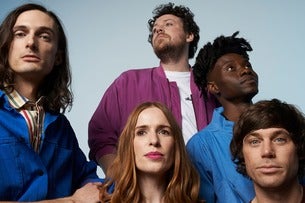 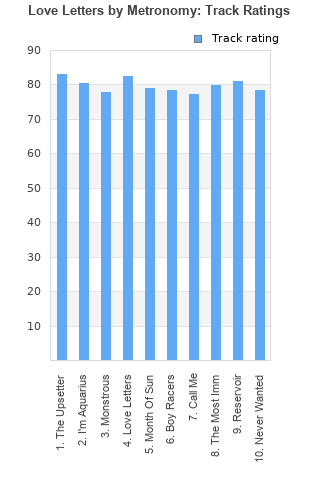 Rating metrics: Outliers can be removed when calculating a mean average to dampen the effects of ratings outside the normal distribution. This figure is provided as the trimmed mean. A high standard deviation can be legitimate, but can sometimes indicate 'gaming' is occurring. Consider a simplified example* of an item receiving ratings of 100, 50, & 0. The mean average rating would be 50. However, ratings of 55, 50 & 45 could also result in the same average. The second average might be more trusted because there is more consensus around a particular rating (a lower deviation).
(*In practice, some albums can have several thousand ratings)
This album has a Bayesian average rating of 70.9/100, a mean average of 69.9/100, and a trimmed mean (excluding outliers) of 70.6/100. The standard deviation for this album is 16.1.

I'm waiting for St. Vincent to trip up but she doesn't seem to have so far. This is just as weird and as irresistible as ever, maybe even a little more soulful than previous albums.

Best track: Prince Johnny. The bass does some great thing, and the chorus (if you can call it that) is a real winner.

Maybe it was the Michel Gondry music video that helped but I never really "got" Metronomy's thing until this album. Where some musicians do a one-off cover of a sixties/seventies song in appropriate costume and think they've done a respectful tribute to the whole era, this is much more carefully considered, and still manages to sound modern.

Best track: Love Letters. I know it's not the *only* track on the album, it's just the one that got stuck in my head the longest.

they sound like a 15 years old teens band trying to create a cool electronic/pop song. very disappointing after the very good The English Riviera :/

Metronomy are awesome and this is proof. It's like a retro-video game soundtrack mixed with modern synths and guitars.

This could have been better, but it was way too safe. English bore-core. Rubbish.

Metronomy has this special retro, yet still progressive sound. And I know they have a solid fanbase that will probably be pleased with this record. Personally, I'm not crazy about this sound, but it's certainly not bad at all. There were a couple times where the vocals actually reminded me of Arcade Fire, a little Wilco here too, given the retro sound. But I like both the aforementioned bands work much better.

Your feedback for Love Letters