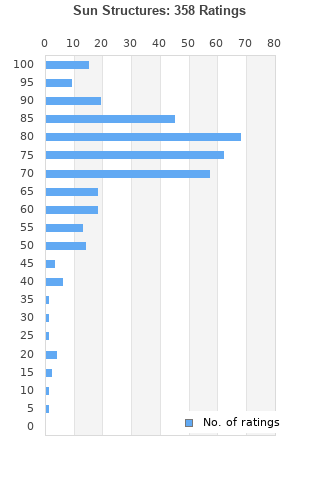 Sun Structures is ranked as the best album by Temples. 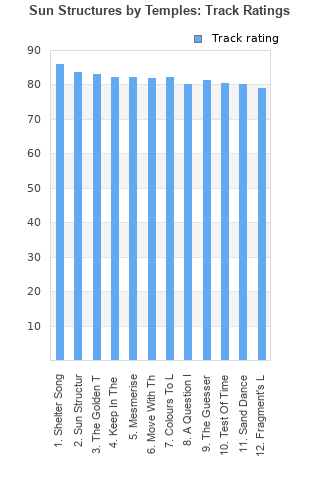 Rating metrics: Outliers can be removed when calculating a mean average to dampen the effects of ratings outside the normal distribution. This figure is provided as the trimmed mean. A high standard deviation can be legitimate, but can sometimes indicate 'gaming' is occurring. Consider a simplified example* of an item receiving ratings of 100, 50, & 0. The mean average rating would be 50. However, ratings of 55, 50 & 45 could also result in the same average. The second average might be more trusted because there is more consensus around a particular rating (a lower deviation).
(*In practice, some albums can have several thousand ratings)
This album is rated in the top 17% of all albums on BestEverAlbums.com. This album has a Bayesian average rating of 74.7/100, a mean average of 73.2/100, and a trimmed mean (excluding outliers) of 74.7/100. The standard deviation for this album is 15.8.

Should've been a cover band... hehe. I mean it isn't bad, but it feels like they studied up on how to get certain sounds, etc. instead of doing their own thing. Totally agree that Lonerism is much more interesting. Having said that, for a 2010s album, it could be worse.

It's quite samey, and it draws too heavily on it's influences, but it still is enjoyable enough to merit a listen every once in a while.

While I admire the skill on display here, it strikes me as something of a pointless exercise.

This is better than tame impala , more enjoyable to listen imo

It's perfectly listenable, but far too similar to its' influences.

Your feedback for Sun Structures