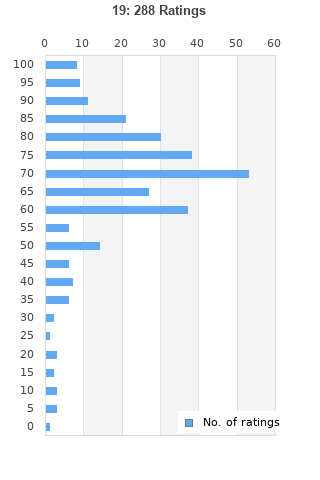 MUSIC CD BY ADELE – “19” – IT'S IN ABSOLUTELY EXCELLENT CONDITION!!
Condition: Very Good
Time left: 3h 49m 23s
Ships to: Worldwide
$7.90
Go to store
Product prices and availability are accurate as of the date indicated and are subject to change. Any price and availability information displayed on the linked website at the time of purchase will apply to the purchase of this product.  See full search results on eBay

19 is ranked 3rd best out of 5 albums by Adele on BestEverAlbums.com.

The best album by Adele is 21 which is ranked number 499 in the list of all-time albums with a total rank score of 3,863. 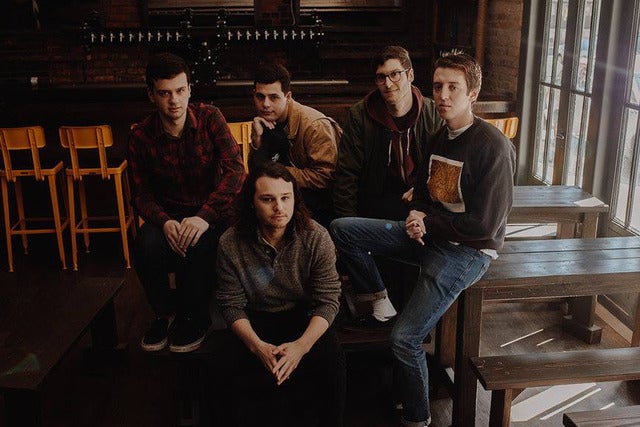 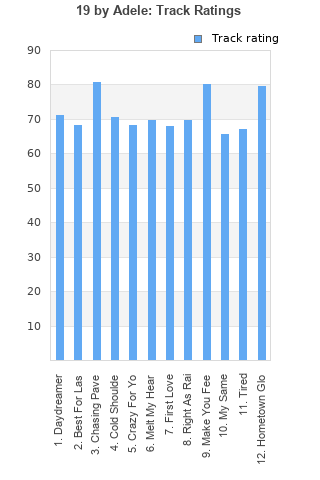 Rating metrics: Outliers can be removed when calculating a mean average to dampen the effects of ratings outside the normal distribution. This figure is provided as the trimmed mean. A high standard deviation can be legitimate, but can sometimes indicate 'gaming' is occurring. Consider a simplified example* of an item receiving ratings of 100, 50, & 0. The mean average rating would be 50. However, ratings of 55, 50 & 45 could also result in the same average. The second average might be more trusted because there is more consensus around a particular rating (a lower deviation).
(*In practice, some albums can have several thousand ratings)
This album has a Bayesian average rating of 69.2/100, a mean average of 67.7/100, and a trimmed mean (excluding outliers) of 69.0/100. The standard deviation for this album is 18.4.

Her voice is good, but the album is tottaly unremarkable, forgettable. Overall, 60/100.

I loved this album when it first came out I only bought it because of the song Chasing Pavements and I have no regrets. It is a good debut album I had no idea she would become such a big star. 21 & 25 would follow but this is where it all began. A great voice and down to earth lyrics.

This may be the only album Adele will ever have where she writes songs single-handedly, and I love the stripped down style. Best for Last and Hometown Glory have still yet to be overshadowed by her other work, in my opinion (except Someone Like You).

It's pretty weak,even compared to the other Adele albums,which are not that good on their own. With almost no standouts and it just being kind of boring. Can't recommend.

Has highlights but it's very weak as an album. Best track is Chasing Pavements and Daydreamer

A consistent and strong debut, with a few gems

Boring, all songs are about the same subject, and minimal production, except for the hits, looks like a cash-in to Chasing Pavements. Oh, and even when the production is OK and the song isn't that boring, her voice just ruins it.

To me so better than 21, a higher quality, more music, more blues, more fun, less pop and more emotions

Not bad, but Lyrics are a bit flat and her vocals are too raw on this album.