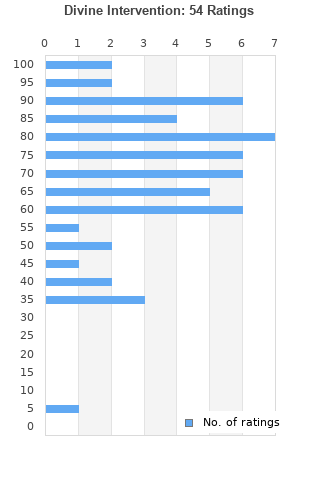 Divine Intervention is ranked 8th best out of 15 albums by Slayer on BestEverAlbums.com.

The best album by Slayer is Reign In Blood which is ranked number 494 in the list of all-time albums with a total rank score of 3,883. 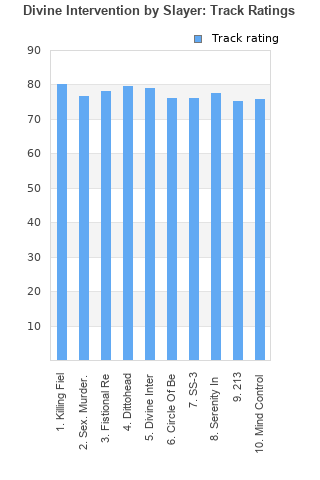 Outliers can be removed when calculating a mean average to dampen the effects of ratings outside the normal distribution. This figure is provided as the trimmed mean. A high standard deviation can be legitimate, but can sometimes indicate 'gaming' is occurring. Consider a simplified example* of an item receiving ratings of 100, 50, & 0. The mean average rating would be 50. However, ratings of 55, 50 & 45 could also result in the same average. The second average might be more trusted because there is more consensus around a particular rating (a lower deviation).
(*In practice, some albums can have several thousand ratings)
This album has a mean average rating of 70.0/100. The trimmed mean (excluding outliers) is 71.2/100. The standard deviation for this album is 20.9.

Strange production. Seems like they wanted everyone to know that the new guy on the stool is just as good as the last one. He's so far up in the the mix ou can almost hear him breath. He is good though and the band hit as hard as ever. The slayer vox here are even less melodic than before (if that's possible) and are mostly shouted out sounding more like a rap or hardcore vox. Totally fits the frenetic music. No totally stand out trcks like on the classic lps but consistently and aggressively fine.

Your feedback for Divine Intervention