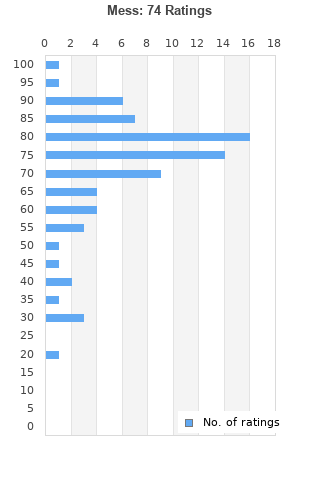 Sealed CD Liars Mess 2014 Mute MUT 9585-2
Condition: Brand New
Time left: 5d 4h 54m 35s
Ships to: Worldwide
$12.77
Go to store
Product prices and availability are accurate as of the date indicated and are subject to change. Any price and availability information displayed on the linked website at the time of purchase will apply to the purchase of this product.  See full search results on eBay

Mess is ranked 3rd best out of 10 albums by Liars on BestEverAlbums.com.

The best album by Liars is Drum's Not Dead which is ranked number 3381 in the list of all-time albums with a total rank score of 437. 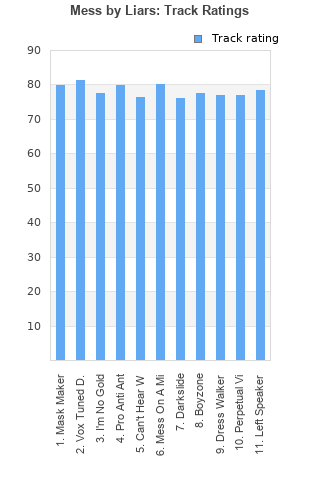 Rating metrics: Outliers can be removed when calculating a mean average to dampen the effects of ratings outside the normal distribution. This figure is provided as the trimmed mean. A high standard deviation can be legitimate, but can sometimes indicate 'gaming' is occurring. Consider a simplified example* of an item receiving ratings of 100, 50, & 0. The mean average rating would be 50. However, ratings of 55, 50 & 45 could also result in the same average. The second average might be more trusted because there is more consensus around a particular rating (a lower deviation).
(*In practice, some albums can have several thousand ratings)
This album has a Bayesian average rating of 71.9/100, a mean average of 71.0/100, and a trimmed mean (excluding outliers) of 71.7/100. The standard deviation for this album is 16.1.

As a longtime Liars fan, Mess just sounds like the natural evolution of the band. Following the wonderfully atmospheric WIXIW, they've returned to their more wildly absurdist roots while maintaining their adventure into electronics. It's not perfect, but it's good to see a band who's unafraid to take chances rather than just tread water.

Only slightly redeemed by the last track. otherwise very annoying.

Surprised by this album. A dark, yet powerful and unique sound. I think all the songs together strengthen each other, and work together perfectly for an album. No real standout single or anything, but this group has their sound mastered. Definitely one of the first consistent bodies of works so far this year.

Your feedback for Mess