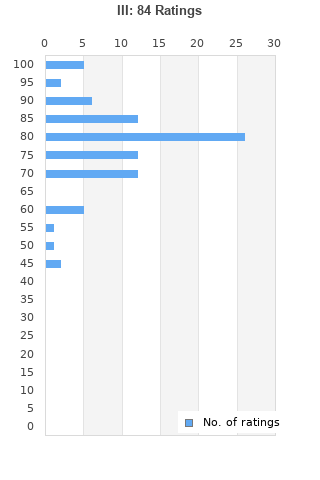 III is ranked 2nd best out of 9 albums by BADBADNOTGOOD on BestEverAlbums.com.

The best album by BADBADNOTGOOD is IV which is ranked number 2860 in the list of all-time albums with a total rank score of 540. 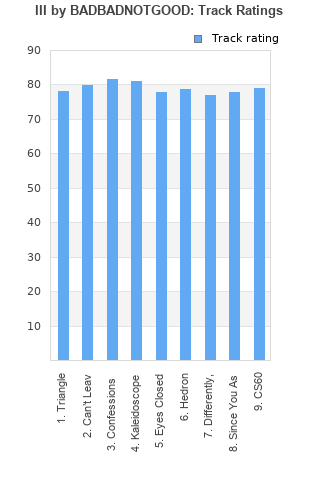 Rating metrics: Outliers can be removed when calculating a mean average to dampen the effects of ratings outside the normal distribution. This figure is provided as the trimmed mean. A high standard deviation can be legitimate, but can sometimes indicate 'gaming' is occurring. Consider a simplified example* of an item receiving ratings of 100, 50, & 0. The mean average rating would be 50. However, ratings of 55, 50 & 45 could also result in the same average. The second average might be more trusted because there is more consensus around a particular rating (a lower deviation).
(*In practice, some albums can have several thousand ratings)
This album is rated in the top 3% of all albums on BestEverAlbums.com. This album has a Bayesian average rating of 77.6/100, a mean average of 78.1/100, and a trimmed mean (excluding outliers) of 78.1/100. The standard deviation for this album is 11.2.

One of the best jazz albums since the age of Bitches Brew.

Come on this is a very good album! Tracks like Kaleidoscope or Hedron are just amazing!

New to badbadnotgood and loving them. Don't have one and two but on my wish list

I love these guys, but unfortunately for me this a small step down from their first two albums. It feels as though there is less spontaneity and energy, though it isn't too detrimental. They definitely have a lot more focus on intricacy and atmosphere, which is always nice. Still highly recommended for fans of the band or for those who haven't given them a listen yet.