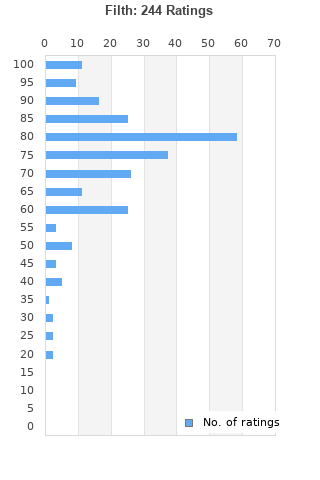 SWANS Filth (new and sealed vinyl)
Condition: New
Time left: 4d 6h 12m 11s
Ships to: Worldwide
$82.00
Go to store
Product prices and availability are accurate as of the date indicated and are subject to change. Any price and availability information displayed on the linked website at the time of purchase will apply to the purchase of this product.  See full search results on eBay

Filth is ranked 6th best out of 35 albums by Swans on BestEverAlbums.com.

The best album by Swans is To Be Kind which is ranked number 253 in the list of all-time albums with a total rank score of 7,836. 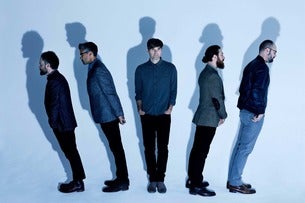 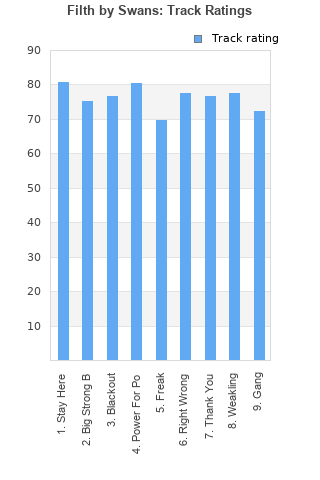 Rating metrics: Outliers can be removed when calculating a mean average to dampen the effects of ratings outside the normal distribution. This figure is provided as the trimmed mean. A high standard deviation can be legitimate, but can sometimes indicate 'gaming' is occurring. Consider a simplified example* of an item receiving ratings of 100, 50, & 0. The mean average rating would be 50. However, ratings of 55, 50 & 45 could also result in the same average. The second average might be more trusted because there is more consensus around a particular rating (a lower deviation).
(*In practice, some albums can have several thousand ratings)
This album is rated in the top 13% of all albums on BestEverAlbums.com. This album has a Bayesian average rating of 75.3/100, a mean average of 74.5/100, and a trimmed mean (excluding outliers) of 75.4/100. The standard deviation for this album is 15.0.

I remember the first time listening to this and thinking it was repetitive and without skill. I frequently go on black/death metal kicks but this is by far the singular most oppressive thing I've ever heard. it's painful to listen to and makes me genuinely sick, makes my muscles ache. I feel like I need a massage and shower after listening to this, it just tenses me up so much.

the guitars are used solely to create ugly noises and the percussion is pounding, usually slow, and always brutal. every hit on the drums is powerful and violent. the vocals are tortured and only serve to repeat misanthropic, pessimistic, condemning mantras until they sink in. there's an art here in how "melodies," almost without melody, are displayed, using those ugly guitar noises and syncopated to a point where at first it sounds off, but matches the vocals/lyrics perfectly well with how broken it is. incredibly original. it might take a couple listens b4 you hear anything at all more than what sounds like random noise, but trust me it's only b/c you never heard "riffs" like this.

you want the true effects, blast it with loudspeakers and a subwoofer, it's worth the minor, temporary ear damage. this isn't supposed to be pleasant. Gira is an absolute genius, that's a fact.

Some of the most challenging, yet rewarding, music I have ever listened to. I would recommend if you're looking to really broaden your musical horizon and test yourself.

when it clicks, it clicks. the quintessential no wave record.

No wave at it's best

Someone pissed Michael Gira off. All the raw energy of Gira's creative mind has come into practice.

Quite an interesting record. Very hard hitting, very heavy, and some interesting vocals from Gira, especially when comparing to his vocals on the latest Swans album To Be Kind. You can hear the feedback coming from the guitars because of how heavily amped up they are, and the kind of tones used are incredibly reminiscent of industrial music. The drums are mixed quite high up in the mix, and for good reason. They're hard hitting, loud, fast and really suit the no wave style that this album aims for. Although the lyrics are a bit lackluster, the instrumentation makes up entirely where the lyrics leave an empty space. Overall, it's great, but I do think it could have been marginally better.

Probably one of the coldest albums I have ever heard. This is a very raw, grimy, sinister record. Definitely not the easiest listen out there, but I like the darkness and toughness.

On paper, this is great. In practice, it's great.

Your feedback for Filth