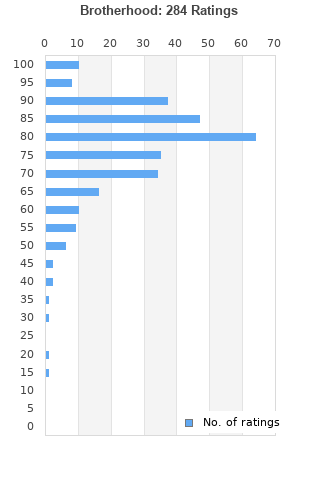 NEW ORDER-BROTHERHOOD-QWEST-1986-1-25511-ORG-LP-RARE-FROM PRIVATE COLLECTION!!
Condition: Used
Time left: 15h 2m 31s
Ships to: Worldwide
$29.98
Go to store
Product prices and availability are accurate as of the date indicated and are subject to change. Any price and availability information displayed on the linked website at the time of purchase will apply to the purchase of this product.  See full search results on eBay

Brotherhood is ranked 5th best out of 29 albums by New Order on BestEverAlbums.com.

The best album by New Order is Power, Corruption & Lies which is ranked number 262 in the list of all-time albums with a total rank score of 7,603. 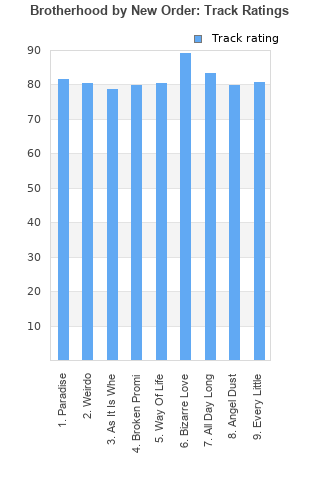 Rating metrics: Outliers can be removed when calculating a mean average to dampen the effects of ratings outside the normal distribution. This figure is provided as the trimmed mean. A high standard deviation can be legitimate, but can sometimes indicate 'gaming' is occurring. Consider a simplified example* of an item receiving ratings of 100, 50, & 0. The mean average rating would be 50. However, ratings of 55, 50 & 45 could also result in the same average. The second average might be more trusted because there is more consensus around a particular rating (a lower deviation).
(*In practice, some albums can have several thousand ratings)
This album is rated in the top 3% of all albums on BestEverAlbums.com. This album has a Bayesian average rating of 78.3/100, a mean average of 77.6/100, and a trimmed mean (excluding outliers) of 78.5/100. The standard deviation for this album is 12.4.

Dissapointed by this albums , his past 2 albums are Excellent, cant relate to this

A lot more interesting ideas than on Low-Life. They managed to stay relevant.

God, Brotherhood is so well-written that, yeah, the production is a bit muddy, but track-for-track, it's incredibly solid. Weirdly, the best and most famous song from the record "Bizarre Love Triangle" doesn't really fit, but who am I to argue with a great track?

I also really dislike the production on this album (especially the 1st side)...Just feel some of these songs would have sounded a lot better with a lighter touch and had they been allowed to breathe a bit. BLT is of course Majestic.

Really good hidden (and not so hidden) gems on this album. Personally, I like All Day Long the best, but opinions can differ. Anyways it's a good album. One of New Order's best.

A very wobbly album, especially the first side. Side two does its best to redeem things as "Bizzare Love Triangle", "All Day Long", and "Every Little Counts" are all strong tracks.

This is a wonderful record from New Order! I wonder why this one hasn't got more recognition?

Just a notch below "low life" , but still a solid album, with the kick ass
Bizarre love triangle in the. Mix . Not bad

Your feedback for Brotherhood