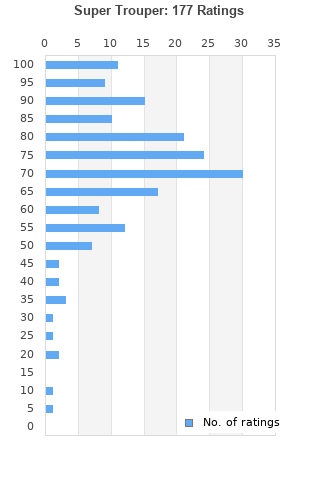 Abba ; Super Trouper LP ( Used Vinyl/ Canadian )
Condition: Used
Time left: 1h 21m 30s
Ships to: Worldwide
$9.99
Go to store
Product prices and availability are accurate as of the date indicated and are subject to change. Any price and availability information displayed on the linked website at the time of purchase will apply to the purchase of this product.  See full search results on eBay

Super Trouper is ranked 6th best out of 19 albums by ABBA on BestEverAlbums.com.

The best album by ABBA is Arrival which is ranked number 1117 in the list of all-time albums with a total rank score of 1,646. 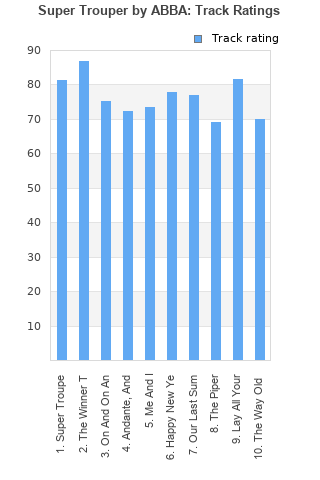 The Winner Takes It All
Rating: 86 (92 votes)Comments:

Rating metrics: Outliers can be removed when calculating a mean average to dampen the effects of ratings outside the normal distribution. This figure is provided as the trimmed mean. A high standard deviation can be legitimate, but can sometimes indicate 'gaming' is occurring. Consider a simplified example* of an item receiving ratings of 100, 50, & 0. The mean average rating would be 50. However, ratings of 55, 50 & 45 could also result in the same average. The second average might be more trusted because there is more consensus around a particular rating (a lower deviation).
(*In practice, some albums can have several thousand ratings)
This album has a Bayesian average rating of 73.0/100, a mean average of 72.6/100, and a trimmed mean (excluding outliers) of 73.0/100. The standard deviation for this album is 17.6.

This album makes me cry in a special way, can't believe it is not in my top 3 album from them. Beautiful !!!!

Side 1 is fairly consistent and Side 2 starts well but not over keen on the last three songs. Favourite track : 'Our Last Summer'.

Arguably, one of their best records. Pristine and polished, like they always do.

Not as good as Abba'75, Arrival or Visitors. Contains The Winner Takes It All & Super Trouper but their are 4 fillers that are not that great The Piper is awful and Happy New Year & Old Friends are lazy, Andante Andante is just ok .On a better note Our Last Summer & Lay All your Love..... could have been singles. Overall 75/100

3 very good pop songs and a lot of fillers.

Tensions may have been growing within the group when Abba recorded their seventh album in 1980, but the album turned out be one of their most consistent with several classics besides the hits "The Winner Takes it All", "On and On and On" and "Super Trouper".

"Happy New Year" written in Abba's welknown musical style, became one of their most popular, and the song was released as a single 1999 to celebrate the new millennium.

"Andante Andante" is one of Abba most beatiful ballads, and a personal favourite of mine.

"Our Last Summer" is, though not as strong as "Andante Andante" another fine ballad, featuring a surprising guitar break from Lasse Wellander.

"The Piper" is a folkish experimental song, slightly in the vein of "The Eagle" from "The Album".

"Lay All Your Love on Me is a disco-styled song that brings thought towards the previous album "Voulez Vous".

The closing track "The Way Old Friends Do" which was recorded live, sounds like an old Scottish folk-song and works as a magnificent finale to a near perfect album.

They were maturing, but hadn't quite figured out how their sound should change. An effort, but a bit off.

The singles are excellent but the rest is a bit ropey. Example : The Piper, The Way Old Friends Do, and Andante Andante charter new depths into how cringe-worthy you can get.

Your feedback for Super Trouper